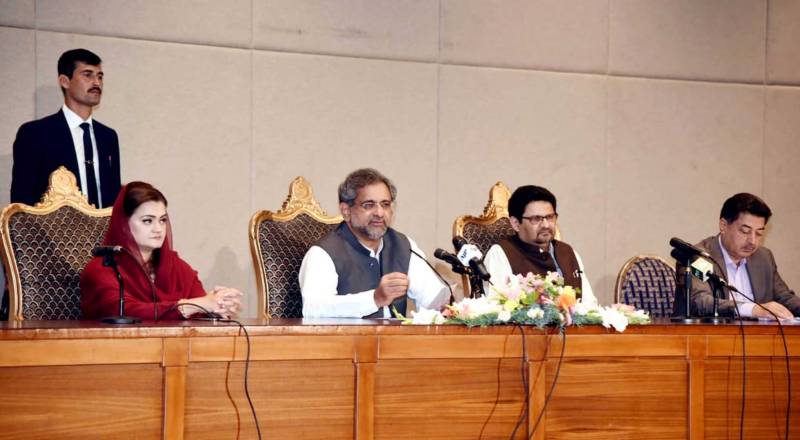 ISLAMABAD: Prime Minister Shahid Khaqan Abbasi says record one undred and sixteen oil and gas discoveries were made during the last five years.

Enumerating government's performance in oil and gas sector at a news conference in Islamabad today, he said we have addressed the issue of gas shortage in the country.

The Prime Minister said the government has ensured cost effective and efficient supply of gas to all consumers in the country.

He reminded that as a result of availiabity of sufficient gas, we were able to export six hundred thousand tonnes of fertilizer last year.

Shahid Khaqan Abbassi said we have also made arrangements for the laying of North South Pipeline with the cooperation of Russia and China.

Prime Minister said the second mid-country refinery would be set up near Lahore at a cost of six to seven billion rupees with a capacity of three hundred thousand barrels of oil.

Prime Minister Abbasi said besides new refineries the capacity of the existing one in Karachi will be enhanced from fifty thousand to one hundred thousand barrels. He said PARCO coastal refinery would be completed in three years at a cost of five billion dollars and this would be the largest industrial undertaking in the history of Pakistan. Replying to a question, he said Pakistan entered into a gas import contract with Qatar at the lowest rates in the world. To another question, he said oil prices in Pakistan are less than most of the oil importing countries.

Turning to LPG, the Prime Minister said its production increased more than hundred percent during tenure of the present Government.

He said LPG air-mix plants are being installed in areas where supply of piped gas is not possible. The Prime Minister said the Government introduced quality diesel and petrol in the country, which are not only environment and vehicle friendly but also are cheaper. He said work has also been initiated for transmission of oil from Karachi to Peshawar through pipeline.

Earlier, speaking as chief guest at the awards distribution ceremony of All Pakistan Newspapers Society in Islamabad today, Prime Minister said the PML(N) Government has lived up to its commitment not to interfere in freedom of expression.

The Prime Minister said PML(N) made a firm pledge not to resort to coercion or pressure tactics against media. Prime Minister Abbasi said criticism apart, it is also responsibility of media to project achievements of the Government and measures aimed at welfare of the masses.

Speaking on the occassion, Minister for Information and Broadcasting Marriyum Aurangzeb has expressed the confidence that media will play its due role in the conduct of free, fair and transparent elections in the country.

She said democracy and journalism have a deep link. She described the passage of Right to Information Act as a big achievement of present government.