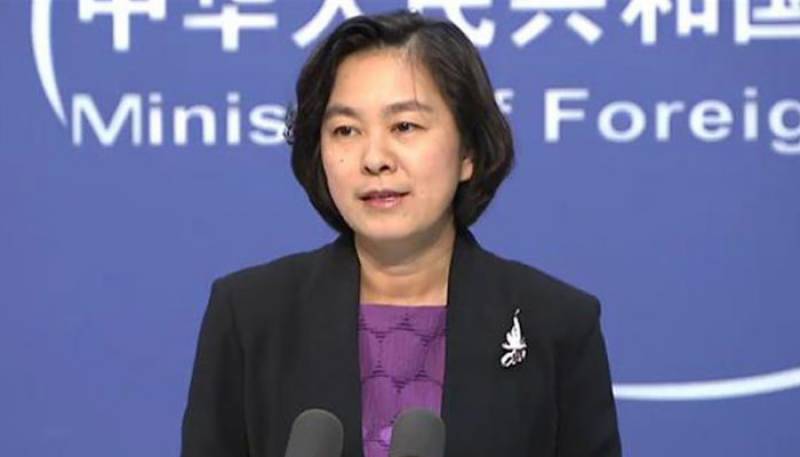 BEIJING: Commenting on India’s protest to Pakistan against issuance of the Gilgit-Baltistan Order, China on Tuesday said that the Kashmir issue was a legacy issue between Pakistan and India and should be properly handled by the two countries through dialogue and consultation.

“First of all, I will like to say that the Kashmir issue is a legacy issue between Pakistan and India and should be properly handled by the two countries through dialogue and consultation,” Chinese foreign ministry’s spokesperson Hua Chunying said during her regular press briefing held here.

The Pakistan government has already categorically rejected India’s protest against the Gilgit-Baltistan Order and its claim over Indian occupied State of Jammu Kashmir as an ‘integral part’ of India. When asked to respond that the move was aimed at advancing the China-Pakistan Economic Corridor (CPEC) project through the region, she said, “China has taken note of relevant reports.”

Hua said that CPEC was a framework for a long-term cooperation between China and Pakistan and it aimed to help improve local infrastructure and promote local economic and social development.

“We have repeatedly stressed that CPEC is a framework for cooperation between China and Pakistan focused on long-term cooperation in various fields. It aims to help improve local infrastructure and livelihoods and promote local economic and social development,” she added.

The spokesperson remarked the cooperation on CPEC would not affect China’s position on the Kashmir issue. A spokesperson for Pakistan’s Foreign Ministry recently remarked that as a responsible member of the international community, Pakistan has always taken steps consistent with UN Security Council resolutions on Jammu Kashmir dispute and the latest measure is no exception, as its aim is to further empower the people of Gilgit Baltistan.

Obaid Abrar Khan and Hafiz Tahir Khalil add from Islamabad: Chinese Ambassador to Pakistan Yao Jing on Tuesday said that China is confident that caretaker and then new government in Pakistan would work closely with China for the development of the region.

While giving exclusive interview to ‘Jang Group’ Chinese Ambassador Yao Jing said that Pakistan was on the front line in war against terrorism and has given sacrifices and now the situation in Pakistan is much batter.

He said that including Fata in KP is great achievement of Pakistan, as it was one of the major challenges in the past. Talking about Shanghai Cooperation Organisation (SCO) summit which is going to be held in the month of June Chinese Ambassador said that this would be first time for Pakistan to attend summit as its full member.

Briefing about SCO summit Chinese ambassador said that it’s very comprehensive where ministers from transportation, trade, human rights etc had meeting with each others. “Chief Justices of all members’ countries also had meeting in which Chief Justice of Pakistan Justice Saqib Nisar was there to attend meeting.

Chinese ambassador said SCO's main goals to strengthening mutual trust and neighbourliness among the member states; promoting their effective cooperation in politics, trade, the economy, research, technology and culture, as well as in education, energy, transport, tourism, environmental protection, and other areas; making joint efforts to maintain and ensure peace, security and stability in the region; and moving towards the establishment of a democratic, fair and rational new international political and economic order.

He further said the SCO has two permanent bodies, the SCO Secretariat based in Beijing and the Executive Committee of the Regional Anti-Terrorist Structure (RATS) based in Tashkent. “All member countries including Pakistan can get benefit from Regional Anti-Terrorist Structure (RATS), as this would share information to the countries which are facing terrorism,” he added.

Relying to a question about anti-CPEC propaganda by the vested lobby, the ambassador said it will not work, since Pakistani media is highly friendly and cooperative, and it is quite effective in countering it, building positive image of their socio-economic partnership.

He pointed out that consolidating the all-weather friendship between China and Pakistan has more important and practical significance for regional peace and development. The Shanghai Cooperation Organisation (SCO) is a permanent intergovernmental international organisation, which was announced in June 2001 and Pakistan was announced its full member in June 2017.