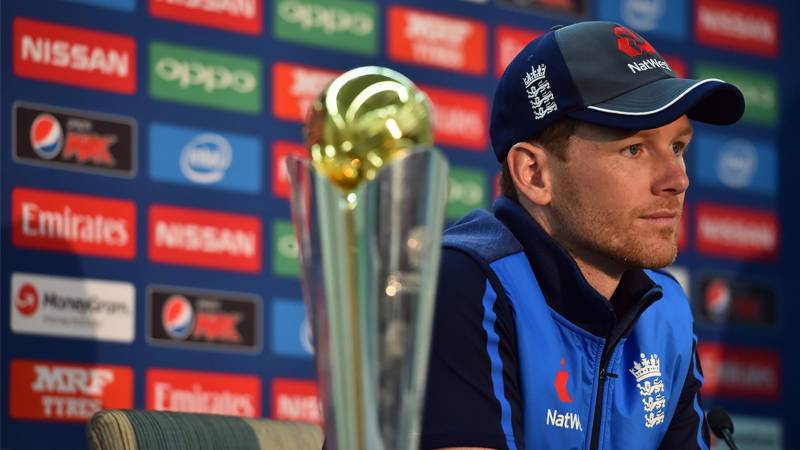 LONDON: England captain Eoin Morgan gave struggling opener Jason Roy a huge vote of confidence on the eve of the Champions Trophy by guaranteeing his place for the tournament.

Roy has been out for single-figure scores in four of his last five one-day internationals and hasn't made a fifty in his last 11 innings in all cricket.

But even if the dashing 26-year-old, who has an ODI strike-rate of over 102 but an average of 36, does not come good against the Tigers, Morgan is determined to stick with him.

"The decision remains the same throughout the tournament," Morgan told reporters at the Oval on Wednesday. "Jason Roy is part of our strong opening partnership with Alex Hales. He'll definitely play."

England collapsed to 20 for six in their final pre-tournament one-day international against South Africa at Lord's on Monday.

Jonny Bairstow spared England total embarrassment in seven-wicket defeat by the Proteas with a fine 51 -- his third fifty in his last four ODIs.

Bairstow has also opened in white-ball cricket for Yorkshire and there are many who believe the England Test wicket-keeper is worthy of becoming an ODI regular, even as a batsman only.

But Morgan said of Bairstow: "He will miss out unfortunately. It's been the case like that for the last couple of years. He's been very good when he's come in, but each and every one of us within the batting department has had ups and downs over the years."

England have made huge progress in ODI cricket since Bangladesh knocked them out of the 2015 World Cup in a dramatic match at Adelaide, with their now dynamic approach leading many pundits to make them favourites for the Champions Trophy.

Former Ireland batsman said not chopping and changing had been key to England's recent white-ball success.

"One of the strongest parts of reinforcing the way that we play and the freedom in which we play with is backing that up with selection," he explained.

Asked if Roy's place would be under threat if he didn't come good in the first couple of group games, Morgan replied: "I cannot see it (Roy's position) changing."

Morgan cited Roy's role in helping England reach the final of last year's World Twenty20 in India – where they lost to the West Indies in Kolkata – as proof of how he could come good in a tournament.

"He hadn't gotten runs in a warm-up game against New Zealand, and then was a huge part of us getting to the final of that T20 tournament," Morgan recalled.

"If we want our players to play cagey or without freedom, yes, we would change things and probably half of us wouldn't be here.

"Jason really epitomises the way we play; the aggression in which he plays, he always plays for the team, and he plays in a manner that is dictated with that. He's a very important part of our side."

All-rounder Ben Stokes only bowled five overs during England's 2-1 series win against South Africa and didn't play the third match at Lord's because of a knee injury.

Stokes bowled on the outfield during England's training session at The Oval on Wednesday and Morgan said: "We will see how he pulls up tomorrow (Thursday) to see how much he will bowl. But I certainly see him bowling."

Morgan, however, having seen Stokes hit a series -winning hundred against the Proteas at Southampton on Saturday, said England would be prepared to play him as a batsman only.

"Absolutely. It's a very strange injury in that it's only in his delivery stride that he feels the pain.

"So if given he couldn't bowl, I still think he'd make great contributions with the bat and in the field."