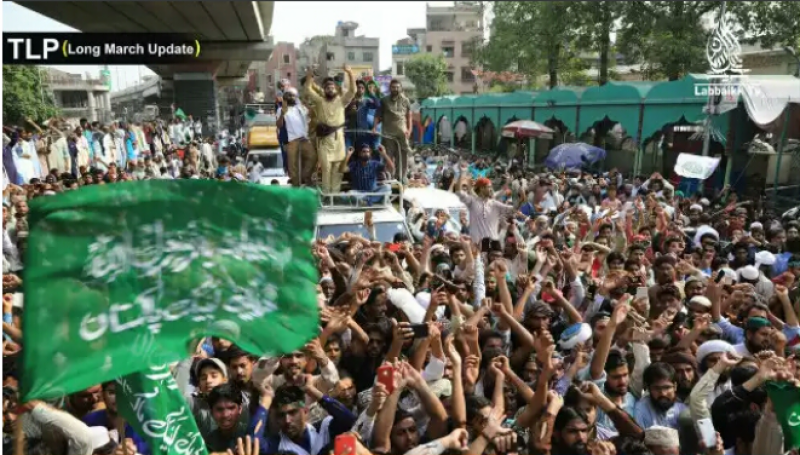 LAHORE – Hundreds of Tehreek-i-Labbaik Pakistan (TLP) supporters have started marching towards the Pakistan’s capital city to stage a massive demonstration against a competition of blasphemous caricatures, depicting Holy Prophet Muhammad (PBUH), in the Netherlands.

Khadim Hussain Rizvi of Tehreek-i-Labbaik Pakistan (TLP), a religio-political party that backs strict blasphemy laws, is leading the march which made its way out of Lahore via Grand Truck Road.

Hundreds of activists gathered at Data Darbar on Wednesday for the demonstration organised by the ultra-conservative party that amassed the fifth largest number of votes in a general election last month.

The 51-year-old cleric has announced that TLP workers would “stay on the streets until either the publication of blasphemous cartoons in the Netherlands is stopped or the government immediately ends diplomatic ties with the Dutch”.

The demand for the envoy’s expulsion was made during the first round of talks between TLP’s top leadership and the government in Lahore.

Most Muslims believe in a total prohibition of visual representation of the prophet, regardless of whether they are positive or negative in nature.

Earlier, the Pakistan Tehreek-i-Insaf (PTI) government was urged to not only “discontinue diplomatic and commercial relations with the Netherlands” but also “demand from other Islamic countries to do the same”.

The TLP had also demanded that since the said competition’s judge is an American national, “therefore, strict measures should also be taken against the US”.

The blasphemous cartoon contest, scheduled for November, is being organised in the Netherlands by Dutch Freedom Party leader Geert Wilders — a right-wing anti-Islam lawmaker who has been widely criticised for his far-right activities. The contest is to be judged by American cartoonist and former Muslim Bosch Fawstin, who won a similar contest in the US in 2015.

Dutch Prime Minister Mark Rutte has distanced his government from the controversial contest, clarifying that: “Wilders is not a member of the [Dutch] government. The competition is not a government initiative.”

In a tweet on Wednesday, Foreign Office Spokesperson Dr Mohammad Faisal said that Foreign Minister Shah Mahmood Qureshi spoke with his Dutch counterpart to discuss the issue of “blasphemous caricatures”.