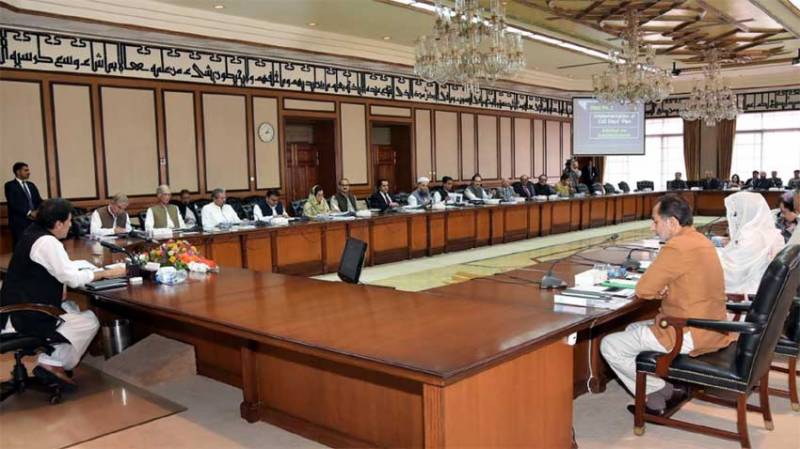 Federal cabinet, which met with Prime Minister Imran Khan in the chair in Islamabad on Tuesday, has decided constitution of various committees and task forces to ensure implementation of government's 100-day plan.

This was stated by Minister for Information and Broadcasting Chaudhry Fawad Hussain while briefing newsmen after the cabinet meeting.

The Minister said National Accountability Bureau laws will be amended to make the body more effective. He said a task force headed by Law Minister Farogh Nasim will work on it.

Fawad Hussain said necessary amendments will also be introduced in civil laws to address women inheritance issues and delay in decision of cases.

The Information Minister said China-Pakistan Economic Corridor was reviewed in the meeting, and it was decided that the Prime Minister will be given a detailed presentation on the projects being executed under CPEC.

He said Arbab Shehzad has been assigned the task of early materialization of FATA's merger with Khyber Pakhtunkhwa.

Chaudhry Fawad Hussain said a committee comprising Shah Mehmood Qureshi and Khursho Bakhtiar has been constituted to consult other political parties and develop consensus for creation of a new province in southern Punjab.

He said task forces have also been set up to ensure fulfilment of the government's promise of providing ten million jobs and five million houses.

The Information Minister said the Prime Minister will review performance of the task forces after every fifteen days.

Speaking on the occasion, Advisor on Climate Change Amin Aslam said a ten billion tree tsunami will be launched across the country on the pattern of PTI government's Billion Tree Tsunami campaign in Khyber Pakhtunkhwa.

He said Plant for Pakistan Day will be observed on second of the next month, and on that day, 1.5 million trees will be planted across the country.

He said saplings will be provided free of cost from different locations across the country.