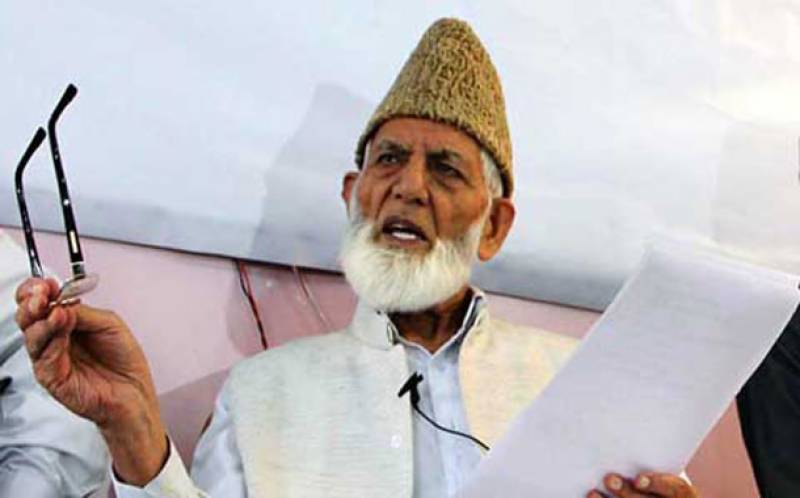 ISLAMABAD: Chairman of All Parties Hurriyat Conference, Syed Ali Gilani, in Indian occupied Kashmir, while expressing his grave concern over the plight of Kashmiri prisoners in all jails in and outside Jammu and Kashmir, has praised the steadfastness and deep conviction of these prisoners of conscience.

According to Kashmir Media Service, Syed Ali Gilani in a statement issued in Srinagar while giving details of the inhuman treatment meted out to the incarcerated resistance leaders and activists, deplored that the Indian fascist ruling class treated “our resistance leaders like professional criminals in their so-called jails which have been turned into worst centers of interrogation.”

He pointed out that the detained leaders and activists had been kept in solitary confinement in small unhygienic cells. “They face the wrath of the jail authorities every movement. Be it a so-called search operation, transfer from one cell to another, fall in line for receiving food or asking for any medical treatment, medicine or any other petty amenities, they are treated as slaves, causing indelible prints of degradation and humiliation on their minds.”

The APHC Chairman said their only sin is that they demand their birth right of self-determination, which was agreed upon by the Indian rulers both at domestic and international levels.

Syed Ali Gilani demanded probe by the United Nations Human Rights Commission, Amnesty International, Human Rights Watch and International Committee of Red cross by visiting the above-mentioned jails and take stock of the ill-treatment and appalling condition of all the prisoners of conscience belonging to Jammu and Kashmir.

He sought United Nations auspices for an early resolution of Kashmir dispute which will be a good omen for peace and development in South Asia.