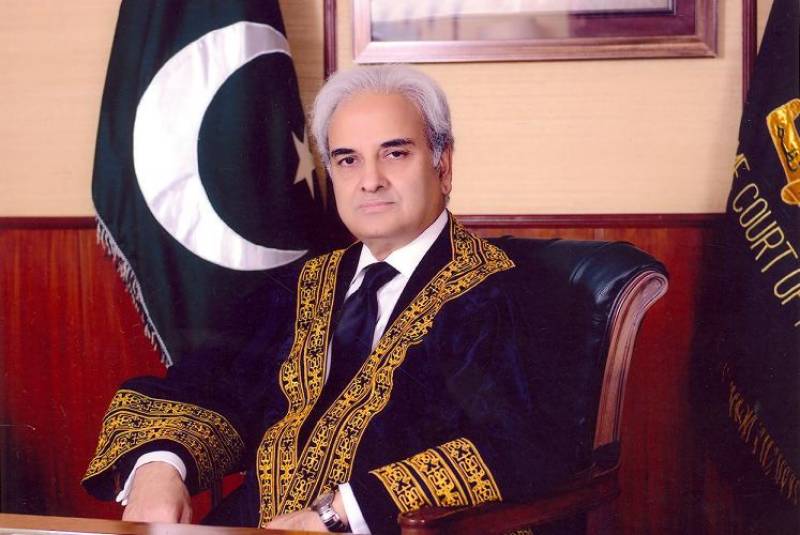 Moments earlier, Geo News had reported that the premier and opposition leader had reached a breakthrough in the meeting held Monday to finalise the caretaker premier.

"We have selected a candidate for caretaker premier who will prove to play a democratic role in the upcoming general election," the premier said while addressing the press conference.

"I am glad that Pakistan Peoples Party reached out to the opposition parties," he further said.

"It was a challenge for all of us and all names that were put forth were credible and respectable individuals," he added. "We tried to make a decision which will be acceptable to the nation and Parliament."

This was the sixth meeting between the two, with the previous five ending in a deadlock.

Speaking to media after the meeting, Shah remarked that both parties are trying their best to finalise the caretaker PM. "Hopefully, there will be consensus on the caretaker premier," he said, adding that they will prove that parliament is superior and that such decisions can be made in parliament.

Ahead of the meeting, Shah had told reporters that both the parties would try their best to decide on a name for the caretaker prime minister.

If there was no consensus reached, then the only option would be to send the matter to a parliamentary committee, Shah added.

It was earlier reported that the government and opposition made contact on Sunday and decided to overcome the impasse over the issue.

PM Abbasi also asked Shah to fly to Islamabad for a final meeting over the matter.

Expressing his confidence in the meeting, the premier had remarked that he hoped a consensus would be reached in today’s meeting. “If there is no consensus, then the issue will be sent to a parliamentary committee.”

On the other hand, Shah expressed displeasure Thursday night at being told that no judges would be named as candidates for the position of caretaker prime minister, especially considering that the incumbent government, as per sources, put forward the names of two former chief justices, Geo News reported.

Syed Khursheed Ahmed Shah of the Pakistan Peoples Party (PPP) said his party wished to propose the names of certain judges as the caretaker PM. However, it was not clear which names he had in mind.

Earlier, sources had said the current leadership suggested names of Justices (retd) Nasir-ul-Mulk and (retd) Tassaduq Hussain Jillani — both ex-chief justices of Pakistan — whereas the PPP finalised Zaka Ashraf and Jalil Abbas Jilani as its candidates for the position.

Shah subsequently announced that he would not be meeting Prime Minister Shahid Khaqan Abbasi for a consultation on the name of the caretaker premier.