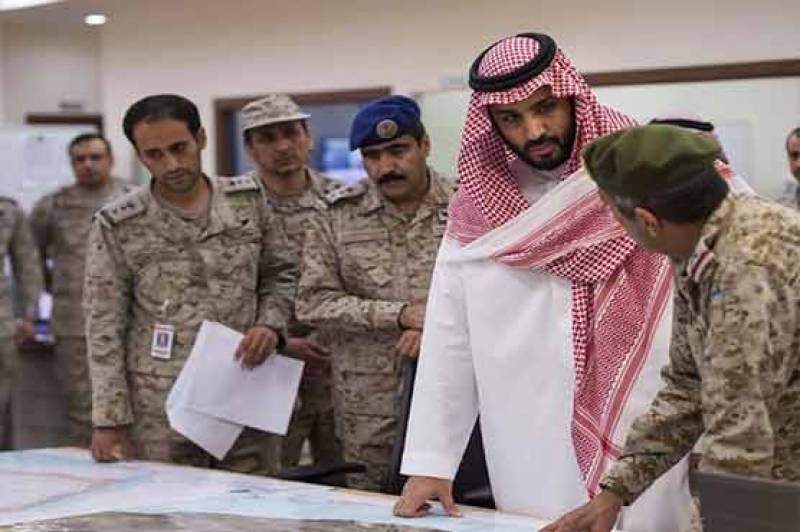 RIYADH - A military coalition led by Saudi Arabia on Monday threatened retaliation against Iran, accusing the Shiite power of being behind a barrage of Yemeni rebel missile attacks on the kingdom.

Saudi forces said they intercepted seven missiles on Sunday, including over the capital Riyadh, in a deadly escalation that coincided with the third anniversary of the coalition s intervention in Yemen.

Displaying wreckage at a news conference in Riyadh of what it said were fragments of those missiles, the coalition claimed forensic analysis showed they were supplied to Huthi rebels by their ally Iran.

We "reserve the right to respond against Iran at the right time and right place", coalition spokesman Turki al-Malki told reporters.

The missile strikes resulted in the first reported fatality from Huthi fire in the Saudi capital.

Egyptian national Abdul-Moteleb Ahmed, 38, died instantly in his bed when what appeared to be burning shrapnel struck his ramshackle room in Riyadh s Um al-Hammam district, leaving a gaping hole in the roof, witnesses told by AFP at the site.

Three other Egyptian labourers in the same room were wounded and hospitalised, they said.

The Huthis said on their Al-Masirah television that Riyadh s King Khalid International Airport was among the targets.

Malki alleged the Iran-aligned Huthi rebels in Sanaa were using the airport there to launch missiles on Saudi territory, adding the coalition had targeted a "missiles shipment" at the facility.

Iran has repeatedly rejected claims it is arming the rebels.

A Saudi-led military coalition intervened in Yemen on March 26, 2015 to try to restore the government of President Abedrabbo Mansour Hadi after the Shiite Huthis and their allies took over large parts of the country, including the capital Sanaa.

Hours after the missile attacks on Saudi Arabia, hundreds of thousands of Huthi rebel supporters flooded the streets of Yemen s capital Monday to mark three years of war.

Sanaa s Sabaeen Square was a sea of Yemeni flags as rebel authorities ordered all schools and government offices shut for the anniversary.

War songs, poems and speeches condemning the United States, the main arms supplier for the Saudi-led coalition, echoed across the square.

"No one can speak on behalf of the Yemeni people. The people taking to the streets today are the real voice," Ibtisam al-Mutawakel, head of a Huthi cultural committee, told AFP.

About 10,000 Yemenis have been killed and 53,000 wounded since the start of the coalition intervention in Yemen, which triggered what the United Nations has called the world s worst humanitarian crisis.

Despite the intervention the rebels remain in control of the capital, northern Yemen and the country s largest port.