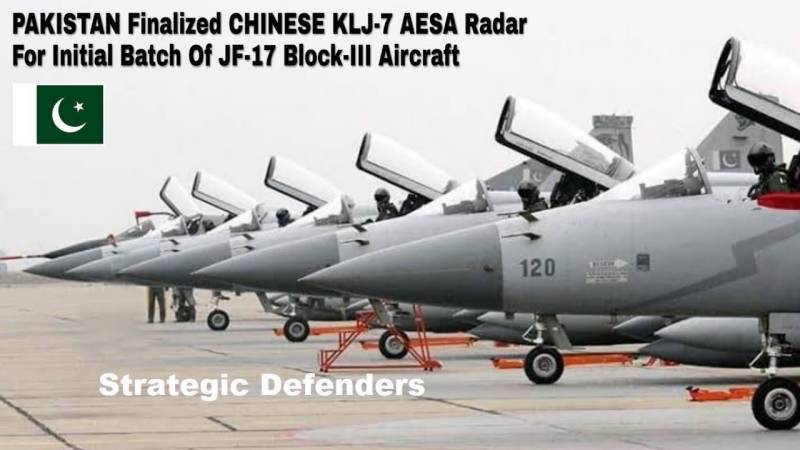 China’s breakthrough in the field of early warning radars, which includes radars that can supposedly monitor stealth aircraft, is on display this week at the World Radar Expo 2021 in Nanjing, according to the Global Times.

The KLJ7A AESA radar will be installed on a JF-17 Block III fighter plane. The plane has already begun concept testing, with batch production set to commence in a few years. The KLJ7A AESA radar has capabilities such as a monitor while scanning, multi-object tracking and multi-target engagement, and synthetic aperture radar with ground moving target recognition. To read more about JF-17 block 3 read our previous article link

It is a modified version of the KLJ-7 V1 with increased power and hence increased range. It is outfitted with 60 JFT-B2s. KLJ-7V2 can identify 40 targets, track 12 of them, and engage two of them at the same time. It also has A-A mode for 3m2 targets, 150KM for 5m2 targets, and 200KM for sea targets. KLJ-7A Radar (AESA)

KLJ-7A is an Active Electronically Scanned Array Radar AESA of KJL-7 family. KLJ-7A is selected to be incorporated on JFT-B3. This is a significant advancement in JFT-B3 capabilities. Because of its small design and similarity to the KLJ-7V1 and V2, the KLJ-7A was chosen. It retains only a few elements from its predecessors and adds a 600mm tile of T-R modules. According to some accounts, it can hold 1000+ TR modules, making it the most powerful anti-jamming radar ever deployed by the PAF. Because jammers can only jam a certain frequency bandwidth, each T-R module acts as a distinct RF emitter, making it more difficult to jam.

The KLJ7A AESA radar, like its predecessors, works on the X-Band and has 11 modes of operation, including surveillance and high imaging synthetic aperture, which gives it additional punch in air-to-ground strike capabilities.

This is the 2nd platform in Pakistan Air Force equipped with AESA radar. First one is the J-10C 4++ generation medium category multirole fighter jet. JF-17 is a light category jet whose main task is to protect the skies of Pakistan while J-10C and F-16 are designed for deep strike roles. To read more about J-10C read our previous article