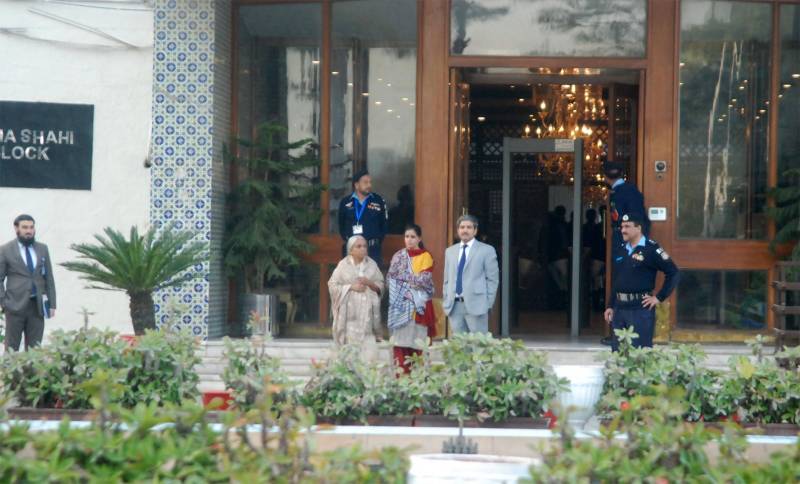 NEW DELHI: India denounced Pakistan on Tuesday for its alleged handling of the visit of the wife and mother of an Indian spy on death row, saying they were harassed and prevented from talking to the prisoner freely.

Kulbhushan Sudhir Jadhav was arrested in March 2016 in the Pakistan province of Balochistan, and convicted of planning espionage and sabotage.

His wife and mother were allowed to meet him behind a glass window on Monday eight months after he was sentenced to death but that gesture of goodwill appeared to have quickly descended into acrimony.

Indian foreign ministry spokesman Raveesh Kumar said Jadhav’s family was subjected to harassment when they arrived to meet him.

“The Pakistani press was allowed on multiple occasions to approach family members closely, harass and hector them and hurl false and motivated accusations about (Shri) Jadhav,” Kumar said in a statement.

Ties between the nuclear-armed neighbours are in a deep chill and Jadhav’s case has added to long running tensions with each accusing the other of supporting cross-border violence.

India says Jadhav is innocent and won an injunction from the World Court to delay his execution, arguing he was denied diplomatic assistance during his trial by a military court.

Pakistan authorities say Jadhav confessed to being assigned by India’s intelligence service to plan, coordinate and organise espionage and sabotage activities in Balochistan “aiming to destabilise and wage war against Pakistan”.

On Monday, Pakistan released a picture of Jadhav’s mother, Avanti, and wife, Chetankul, seated at a desk and speaking to him from behind the glass partition. Islamabad said it had honoured its commitment to give access to the family.

But India alleged the two women were asked to change their dress and remove personal jewellery and the red dot that Hindus wear on their foreheads on the pretext of security. Jadhav’s mother was not allowed to speak in her native Marathi language and was frequently interrupted.

Kumar said Jadhav appeared to be under considerable stress and under coercion at the meeting with his family.