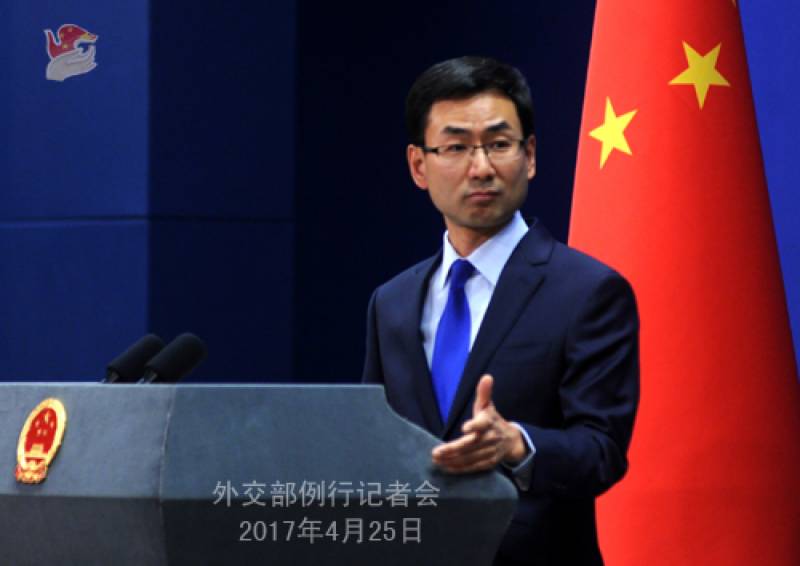 BEIJING: China Wednesday strongly urged the United States and Republic of Korea (RoK) to cancel the deployment of THAAD missile system and withdraw the relevant equipment saying the deployment will aggravate regional tensions and undermine its strategic security interests.

"We strongly urge the US and the Republic of Korea to stop actions that will aggravate regional tensions and undermine China's strategic security interests, cancel the deployment of the THAAD system and withdraw the relevant equipment," Chinese Foreign Ministry Spokesperson Geng Shuang during his regular press briefing said.

China will resolutely take necessary measures to safeguard its own interests, he said.

The spokesman said China has paid great attention to the relevant reports and expressed its grave concern to the US and RoK authorities.

He said the deployment of the THAAD system in the RoK by the US and the RoK will break the strategic balance in the region and further escalate the tensions on the Korean Peninsula.

"It does no good to the goal of denuclearization of the Peninsula and regional peace and stability, runs counter to the efforts of various parties to resolve the issue through dialogue and consultation, and severely undermines China's strategic security interests, he added.

Geng Shuang informed that Minister of Foreign Affairs and International Cooperation of the United Arab Emirates (UAE) Sheikh Abdullah bin Zayed Al Nahyan will pay an official visit to China from May 1 to 2 and hold the first meeting of the China-UAE Intergovernmental Cooperation Committee.

During the visit, Chinese Foreign Minister Wang Yi and Foreign Minister Abdullah will hold talks, co-chair the first meeting of the China-UAE Intergovernmental Cooperation Committee and have an in-depth exchange of views on bilateral relations and global and regional issues of common interest.

Since China and the UAE established diplomatic ties in 1984, the bilateral relationship has developed rapidly. With frequent high-level exchanges and fruitful outcomes in practical cooperation in various fields, the two countries have become each other's trustworthy friend and sincere partner for cooperation, he added.

He said, China has always viewed its relationship with the UAE from a strategic and long-term perspective, and is ready to work with the UAE to bring the strategic partnership between the two countries to new heights.

Responding to a question regarding China's offer to mediate on 'Rohinya' issue, he said, Chinese Foreign Ministry's Special Envoy on Asian Affairs Sun Guoxiang during his visit to Bangladesh met with relevant Bangladesh officials.

Regarding the Rakhine State issue, as a friendly neighbor of Myanmar, China wants to see political stability, ethnical harmony and economic development in the country.

He hoped the relevant issue in the Rakhine State can be properly settled through dialogue and communication among various sides.

"We also hope the international community can provide constructive assistance and prevent the issue from getting more complicated," he added.

Meanwhile, as a friendly country to both Myanmar and Bangladesh, China has maintained close communication with the two countries on the issue.

On a question about launch of China's new aircraft carrier, he reiterated that China pursues peaceful development and a defense policy that is defensive in nature.

By developing defense forces including the navy, China is aimed at upholding national sovereignty, security and development interests and maintaining world peace, he added. (APP)