US India natural allies, will work together against terrorism in region : Rex Tillerson
25 Oct, 2017 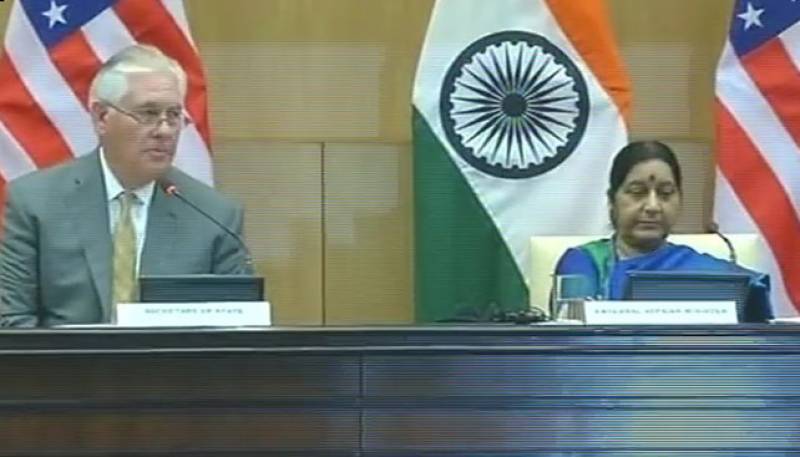 NEW DELHI - The visiting US Secretary of State Rex Tillerson, on Wednesday said that his country won't tolerate terror safe havens anywhere in the world. The top-ranking US Official said, ''India and USA stand shoulder to shoulder against terror.''

Hailing the bilateral ties between the two nations, Tillerson said that both India and the US are ''natural allies'' and have common concerns.

Rex Tillerson further stated that India is crucial to USA-Afghanistan strategy and backed New Delhi as 'a leader in the Indian sub-continent'.

Endorsing India's concerns regarding the cross-border terrorism, the US Secretary of State said, ''Too many terror groups find safe haven in Pakistan which is now threatening the stability of the democratically-elected government there.''

Shedding light about his recent visit to Pakistan, Tillerson said that he had a very open and frank exchange with Pakistan leaders in Islamabad on Tuesday.

We conveyed to Pakistan the expectations we have with them, Tillerson said, in a joint press conference with EAM Sushma Swaraj.

He stated that the US wants to work with Pakistan in a positive way as this will be in their interest in longer term.

Swaraj, while informing that the India-USA-Afghanistan trilateral meeting will be held in December, also highlighted the contribution made by the Indians working in the USA.

The EAM also expressed India's concerns over the new H1B visa rules put in place by the Trump administration.

Rex Tillerson had arrived here on Tuesday from Pakistan. During his stay here, Rex Tillersaon is due to meet the top leadership of the country and discuss ways to further strengthen the Indo-US strategic partnership in key areas.

Tillerson is the second high-ranking official of the Donald Trump Administration to visit India in the last two months.

Ahead of Tillerson's three-day visit, the External Affairs Ministry had said that there will be detailed discussions on further strengthening of Indo-US partnership.

The US Secretary of State, who paid a surprise visit to Afghanistan, had said the Trump administration was of the view that India can play a positive role in creating a peaceful and stable Afghanistan.

He also asserted that America's relationship with India is of strategic importance which is not limited to South Asia. In a major India-policy speech, Tillerson said last week that the US is India's "reliable partner" at the world stage in this period of uncertainty and angst.

He also referred to the rise of China, saying its behaviour and action were "posing a challenge to the rules- based international order".

"China's provocative actions in the South China Sea directly challenge the international law and norms that the US and India both stand for," he had said.

Tillerson's visit also comes at a time when the Trump Administration is "considering" India's request for armed drones for its air force.

Earlier this year, the IAF had requested the US government for General Atomics Predator C Avenger aircraft. It is understood that the IAF would need 80 to 100 units making it approximately a whopping USD 8 billion deal.