Terrorist safe heavens will not be tolerated in region, Rex Tillerson in India
25 Oct, 2017 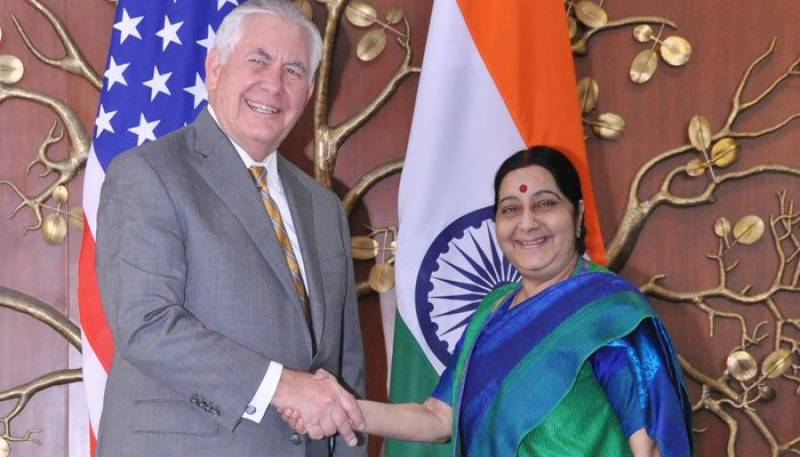 NEW DELHI - Addressing a joint press conference in New Delhi along with Indian Minister for External Affairs Sushma Swaraj, US Secretary of State Rex Tillerson said that India was crucial to Afghan strategy.

In an apparent reference to Pakistan, he said that terrorist safe havens will not be tolerated.

On his maiden visit to Islamabad, Secretary Tillerson – while renewing the US demand seeking action against Afghan Taliban and the Haqqani network – said many of the solutions to the regional challenges have to be found in Pakistan in a statement that underlines the importance of Islamabad in the Trump administration’s new strategy for Afghanistan and South Asia.

Meanwhile, India has agreed to hold talks on Afghanistan with the US and Kabul, Indian Foreign Minister Sushma Swaraj said after meeting Tillerson.

Swaraj said she also discussed deepening economic ties with the US.

Before the meeting between Tillerson and   Sushma Swaraj took place, the US top diplomat paid tribute to Mahatma Gandhi at Gandhi Smriti.

Support for efforts to bolster the Afghan government, China´s influence and other South Asian security issues are likely to be the focus of the discussion between the two leaders, officials reports stated.

Recently, Tillerson called upon India for deeper cooperation in the wake of the growing Chinese influence in the region adding that Washington wishes to   promote a “free and open” region led by prosperous democracies.

India welcomed the comments, saying they “highlighted our shared commitment to a rule-based international order”.