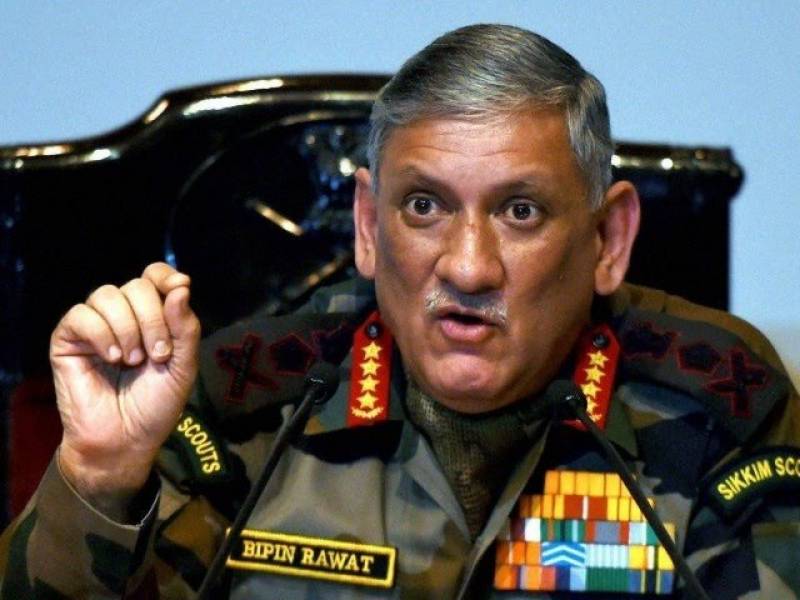 *PAHALGAM:* In a stern warning to Pakistan, Indian Army Chief General Bipin Rawat on Friday said that the neighbouring country should stop aiding militants into Occupied Jammu and Kashmir if it wants peace and tranquillity in the region. Referring to the situation in J&K, General Rawat said that the suspension of combat operations in Jammu and Kashmir can be extended further if the atmosphere of peace continues in the state.

However, he was quick to warn that any action by militants would trigger a rethink immediately. Rawat also warned Pakistan that it should stop sending terrorists into the state if it was interested in peace.

"If Pakistan really wants peace then we will want them to take the first step by stopping infiltration of terrorists into our side. The ceasefire violation mostly takes place to aid infiltration," Gen Rawat said this at a function here, 95-km from Srinagar.

The Army Chief further said that India wants peace along the borders but Pakistan was continuously violating the ceasefire, which caused loss of life and property.

"When such an action takes place, we also have to respond. We cannot sit idle. If there is ceasefire violation, then there will be action from our side," he said. ''For peace, it was imperative that cross-border terrorism comes to an end,'' the Army Chief added.

"It is imperative to stop terrorism from across (the LoC), the camps which are there where training is given to them, from where the ammunition is infiltrated into J&K and India, that should stop. If that happens, then I can assure you that peace will prevail on the borders," he added.

Referring to the suspension of anti-terror operations in Jammu and Kashmir, he said that it was an attempt to make people realise the benefits of peace.

"The suspension of operations or what we call NICO (Non-initiation of combat operations) has been done to make the people believe and see how the atmosphere is when there is peace. The way an atmosphere of peace and calm is here right now, in my opinion, the people here are very happy with that," he said.

On May 16, the Home Ministry had announced that security forces would not launch any operations in J&K during the holy month of Ramzan. However, the security forces reserve the right to retaliate if attacked or if essential to protect the lives of innocent people.

Gen Rawat said the Army will think about continuing the unilateral ceasefire if the peaceful situation continues in the valley.

"If this atmosphere of peace continues, then I assure you that we will think about continuing with NICO. But if there is some action by the terrorists, then we will have to rethink on this ceasefire or suspension of operations or NICO," he said.

Gen Rawat was in Pahalgam to launch Digital Education in five Army Goodwill Schools which has been established with the help of Power Grid Corporation and Extra Marks Foundation.