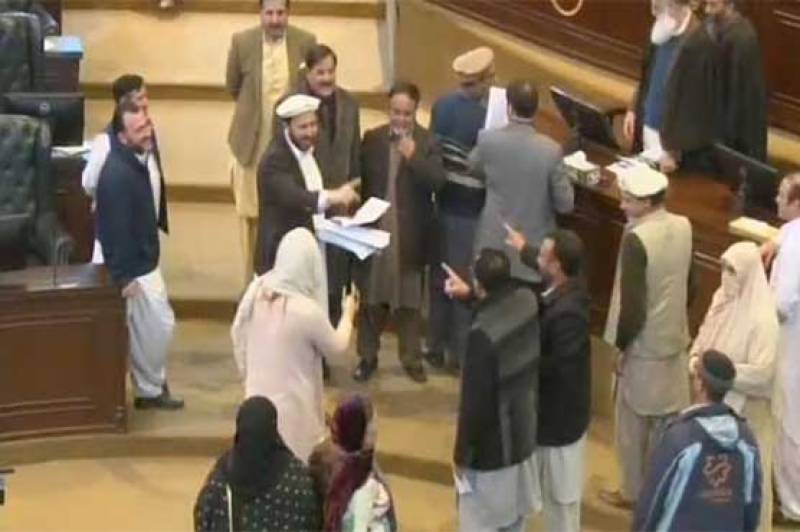 The bill was presented by PTI MPA Muhammad Arif with Deputy Speaker Meher Taj Roghani in the chair.

PTI dissident Ziaullah Afridi presented amendments in the bill, but the treasury benches despite in agreement with their rational did not agreed on their adoption. However, the amendment proposed by Fakhre Azam Wazir of PPP were declared lapsed as the mover was absent from the house.

Giving arguments in support of his proposed amendment, Ziaullah Afridi said that the Act has defamed both PTI and KP government while under the new amendments all powers of the legislative and search committees will be given to judiciary.

Ziaullah Afrid said that demanded said that a commissioner of the Ehtesab Commission was illegal therefore he should be removed from his post. He said that the EC can never be an independent and it would arrest innocent people.

Responding to the contentions of Mr. Afridi, the mover Muhammad Arif was through agree with his proposals, but declined to accept the amendments, saying it will demolish the spirit whole bill.

Parliamentary leader of Awami National Party (ANP) Sardar Hussain Babak said that many questions have been raised on EC, but the chair as not entertaining them. He also raised objections over Speaker and Deputy Speaker role and termed them partisan.

Like the mover of the bill, Provincial Minister for Public Health Engineering, Shah Farman was also agreed with the rational of the amendments. However, he contended that the proposed amendments of the mover will guarantee fair and transparent accountability and helped fulfill the commitment of the PTI chief Imran Khan for the establishment of such independent anti-graft watchdog in the province.

Earlier, the newly elected PTI MPA from PK-62 Kohistan, Zar Gul took his oath as member of the provincial assembly and signed the roll call register.