Another embarassing blow to India from Turkey over the Occupied Kashmir
24 Nov, 2019 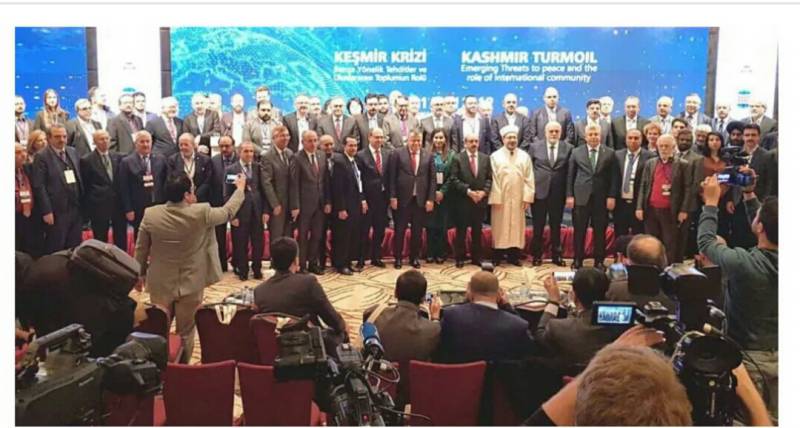 The speakers added that India’s Aug. 5 move to unilaterally scrap the special provisions of the disputed region is a potential trigger to cause instability in South Asia.

The provisions allowed Jammu and Kashmir to enact its own laws and protected the region’s citizenship law, which barred outsiders from settling in or owning land in the territory.

Khan, who is also chairman of the Lahore Center for Peace Research, said: “India has tried to silence Kashmiris in past. It did not work and it will not work in future too.”

Sherry Rehman, a senator from Pakistan, said: “India is trying to redefine the global order […] It is doing it by use of power, not soft power.” Rehman said India’s unilateral actions in Kashmir is a “slap on the face of international community and United Nations”. link link link

“India’s attempt is not to just contain the resistance [of Kashmiris] but also contain the [Kashmir] story… not to let the news filter out,” Rehman said, about the communications blackout imposed by India in the aftermath of the change in status of the Muslim-majority state.

India has since gradually eased the lockdown partially restoring cell phone services. Shamshad Ahmad Khan, a former Pakistani diplomat, warned that if the Kashmir dispute remains unresolved “it will have disastrous consequences as it has become a virtual nuclear flashpoint”.

Khan, who is also chairman of the Lahore Center for Peace Research, said: “India has tried to silence Kashmiris in past. It did not work and it will not work in future too.”

According to him, Kashmir has become the frontier of U.S.-China hegemony. “Israel sells weapons to India, while U.S. backs India to counter China,” he said.

Turkey’s ruling Justice and Development (AK) Party lawmaker Muhammet Amin Abasoglu said the hopes and wishes of Kashmiris are integral to any solution.

“1972 Shimla Agreement created a status quo and both – India and Pakistan – should fulfill conditions of this agreement,” he said, noting that the pact bound both parties to resolve the dispute through negotiations.

Former Iranian Prime Minister Mir-Hossein Mousavi said: “Kashmir dispute has affected many aspects of the region, including development, and the people of Kashmir as well as Pakistan have suffered a lot for 73 years now.”

President of Supreme Court of Appeals of Turkey Ismail Rüştü Cirit while addressing international seminar "Kashmir in Turmoil" stressed on the need of a just system to address human rights issues in Kashmir & final resolution of the dispute according to aspirations of Kashmiris.

“[But] Israel has been invited to the region which is dangerous,” he said, referring to growing India-Israel bilateral relations. *Pan-South Asia vision*

“The acts of hardcore Hindu nationalists have nothing to do with Hinduism,” he said.