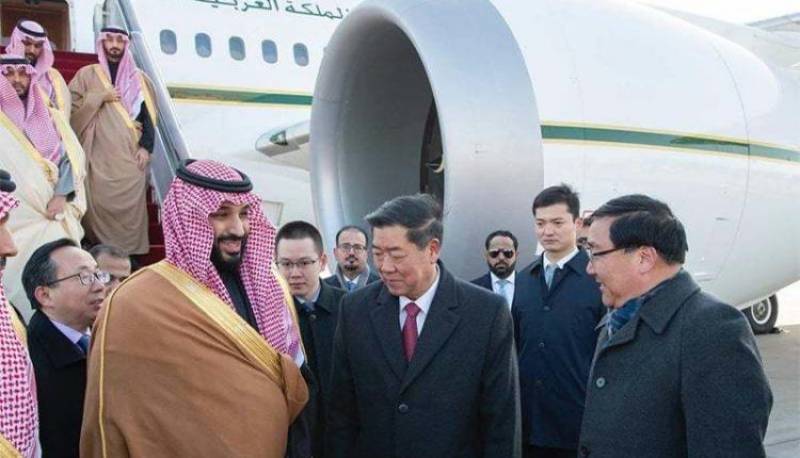 *BEIJING - Saudi Crown Prince Mohammed bin Salman arrived in China on Thursday on the latest stop of a sweep through Asia that aims to expand the kingdom’s influence on the continent.*

Prince Mohammed touched down in the morning following earlier visits to India and Pakistan.

He’s due to meet top officials including Chinese president and ruling Communist Party leader, Xi Jinping, on Friday, highlighting Saudi Arabia’s importance as one of China’s top oil suppliers and a market for its exports, including military drones.

At a meeting on Wednesday, Xi told Iranian Parliament Speaker Ali Larijani that “China’s resolve to develop a comprehensive strategic partnership with Iran will remain unchanged,” regardless of the evolving international situation, according to China’s official *Xinhua News Agency*.

The trip comes five months after the crown prince came under intense pressure following the killing of journalist Jamal Khashoggi at the Saudi Consulate in Istanbul. At the same time, China is facing growing international criticism over its treatment of its Muslim minority groups.

The crown prince will meet China’s leadership, highlighting Saudi Arabia’s importance as one of China’s top oil suppliers and a market for its exports

Thus far, Turkey has been the only majority Muslim country to criticise Beijing, with its Foreign Ministry this month calling treatment of minority Uighurs “a great cause of shame for humanity” and saying it is “no longer a secret” that China has arbitrarily detained more than a million Uighurs in “concentration camps”.

Commenting Wednesday on the crown prince’s visit, Chinese Foreign Ministry spokesman Geng Shuang said recent years have “seen a positive momentum in our cooperation with fruitful outcomes in various areas such as infrastructure and space satellites”.

“We hope that through this visit we will enhance our relations enhance mutual trust, deepen cooperation … and inject momentum into our bilateral relations,” Geng said.

Prince Mohammed is due to visit South Korea after Beijing. MBS was in New Delhi yesterday, where he met Indian Prime Minister Narendra Modi. Modi is in South Korea today for a two-day state visit and will meet with South Korean President Moon Jae-in.