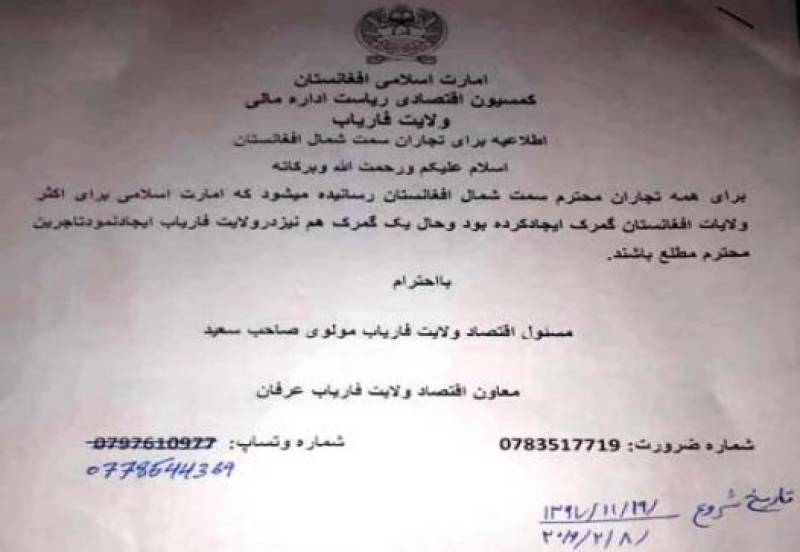 MAIMANA - Afghan Taliban have established a customs office in Sherin Tagab district of northern Faryab province collecting taxes on goods taken to or brought from the Aqina port. link

The Taliban recently announced establishing a customs office and imposing customs duty on export and import goods via the Aqina Port on the border with Turkmenistan.

The customs duty list published by the ‘Taliban Economic Affairs Council’ shows different amounts of duty on 27 items and asks all businessmen to pay the duty.

According to the list, a container carrying medicines has to pay 11,000 to 33,000 afghanis in customs levy.

Meanwhile, businessmen and residents of Faryab province asked the government to act against the Taliban’s customs office.

They termed the move as unjust and warned that 150 million afghanis would go to the insurgency annually from the newly established customs office.

Mohammad Sharif, a shopkeeper in Maimana, who exports goods from Balkh province, termed the Taliban’s customs office as an unfair step by the Taliban and added this would badly affect common people.

He asked the Taliban if their struggle was to help people, they should remove the customs office they had recently established.

He said the Taliban received enough money from the customs office and bought weapons and gears for insurgency.

Maulvi link Saeed, who introduced himself as a Taliban economic affairs expert, said the decision to establish the customs office was in line with the decision of the Taliban leadership and added the facility had been established since February 8 and everyone was well-informed about custom duties.

About businessmen’s concerns, he said 80 percent of Faryab’s land was in the Taliban’s hands and the government had no right to charge customs duty on businesses.