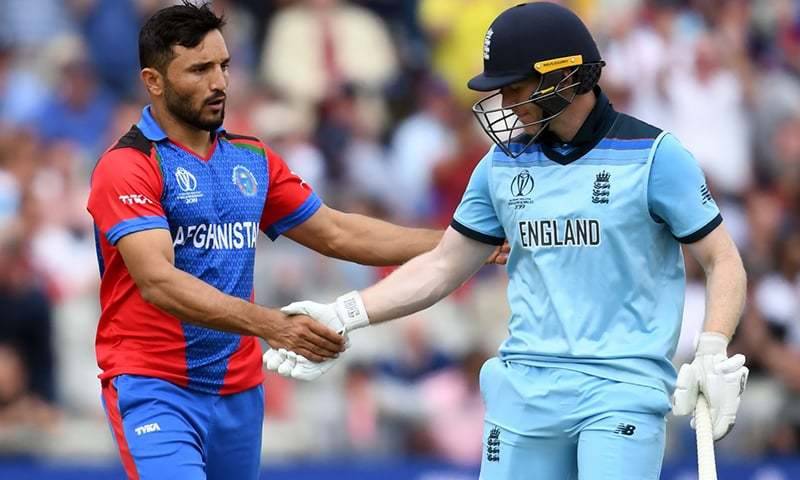 LONDON - England captain Eoin Morgan set a new world record for most sixes in a one-day international innings as the World Cup hosts piled up 397 for six in against Afghanistan on Tuesday.

Morgan hit 17 sixes in his career-best 148, with England's total of 25 sixes also a new world record.

Morgan, dropped on 28, dominated a third-wicket stand of 189 with Joe Root (82), whose contribution to their partnership was a mere 33.

Afghanistan star leg-spinner Rashid Khan set an unwanted record with 0-110 in nine overs -- the most expensive return at a World Cup and second costliest in all ODI cricket.

But one ball after launching Gulbadin Naib for the record-breaking six, Morgan holed out off the Afghanistan captain to end a 71-ball innings that also featured four fours.

His innings, which featured 118 runs in boundaries, was all the more impressive as Morgan had been doubtful for this match with a back spasm suffered in England's eight-wicket win over the West Indies, in which he could not bat.

Jonny Bairstow (90) got England off to a solid start after Morgan won the toss, with the home side accelerating after James Vince fell for 26 when he mishooked paceman Dawlat Zadran to short fine-leg.

Rank outsiders Afghanistan, yet to win a game at this tournament, did not help themselves with some woeful outfielding.

Bairstow was untroubled until, and in sight of his eighth ODI century, he chipped a return catch to Naib.

A visibly annoyed Bairstow walked off having been in command during a 99-ball innings that featured eight fours and three sixes.

Morgan settled in quickly, hitting Naib for two sixes including a fine hit over long-on.

But the left-hander should have been out when he skied Rashid Khan only for Dawlat Zadran at deep midwicket to make such a mess of the catch that the ball bounced out of his hands and over the rope for four.

It was a costly error, with Morgan immediately hitting a soaring six. He cleared the boundary again in a 36th over that cost 18 runs.

Morgan then went to fifty with his fifth six in 36 balls faced when he pulled off-spinner Mohammad Nabi high into an 8,000-capacity temporary stand.

Root was denied a second successive hundred and third of the tournament when he holed out off Gulbadin, whose three for 68 was not a bad return in the circumstances.

But the sixes kept coming, with Moeen Ali setting a new team record when he launched the penultimate delivery of the innings, from Dawlat, over long-on. Line-ups: