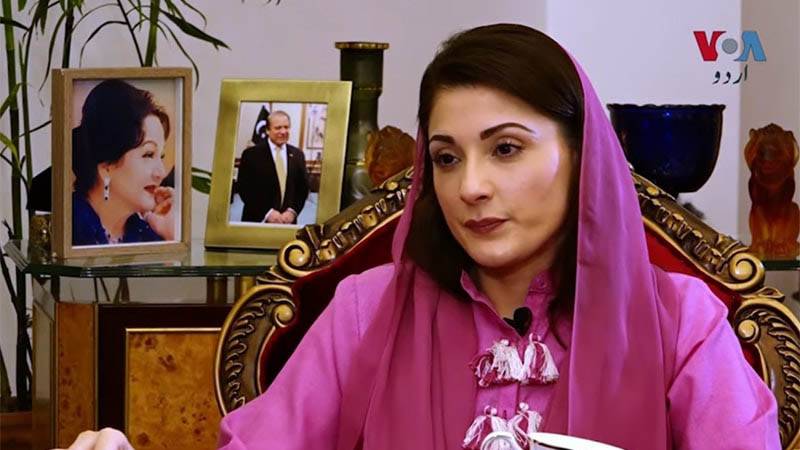 *Pakistan Muslim League-Nawaz leader Maryam Nawaz said on Thursday that she opted for a difficult way, rather than polishing boots to avoid victimization of her family and party.*

The PML-N leader said so during an interview link with Voice of America. She spoke about her political struggle, future strategy and the role of non-political forces in Pakistan.

Maryam said if she had any aspirations, then show would not have opted for the way of struggle.

“I know the other way too, which many individuals choose. But in that, you have to sacrifice your self-respect, polish boots,” she said. “I chose the difficult path and paid a huge price for that over the last three years.”

To a question about “injustice” done to Nawaz Sharif, the PML-N leader said she was not the only saying that injustice was meted out to the former premier, but the entire country was saying so.

She said the judge, who convicted her father, was himself saying this now.

“In fact he is informing how he was blackmailed into punishing Nawaz Sharif with an obscene video of his,” Maryam said. “We can’t look at it in isolation as this is an entire web of lies, an entire chain of sequence of events that culminated into the verdict against Nawaz.”

Maryam described the Panama case against Nawaz as a “conspiracy”, which she said ended at an Iqama.

“The world knows that an Iqama is a resident visa and for not receiving its imaginary salary, a prime minister of 220 million people was forced out of the office.”

She also mentioned the formation of a “Whatsapped” JIT and “carefully chosen” judges. She said it was all planned and a few media men were also part of this game.

The PML-N leader referred to a video in which a colonel was reportedly seen walking out of a court building and hiding his face when a journalist attempted to ask him questions on camera.

She also noted the statement of Islamabad High Court’s former judge Shaukat Aziz Siddiqui, in which he said he was under pressure not to grant bail to her and Nawaz. “Today, he is himself seeking justice after being made an example,” Maryam added.

Maryam reaffirmed that she had more evidence pertaining to Judge Arshad Malik video leak controversy, but said she was “acting very responsibly”.

“I am a daughter and I feel like doing all what I can for my father. I can take a bullet for him,” she said. “But I am a Pakistani as well. My purpose is not to get into a confrontation with institutions.”

The PML-N leader said the allegations against Nawaz were first leveled in the media and then in a court. She said her father had thrice been the prime minister of Pakistan, who rendered services for the country.

“The issue of justice and the constitution is linked with him. It is not just mine but every Pakistani’s issue,” she said.

Maryam said Nawaz was not the only prime minister who was punished on the pretext of accountability. “Benazir and Zulfiqar Ali Bhutto also fell prey to it; my fight is also for them.”

She said the constitution specified role of every institution and the real power rested with the people. The PML-N leader said governing the country was the job of representatives elected by the people.

She lamented direct or indirect suspension of democracy over the past 70 years, saying that democratic norms were never allowed to be strengthened in the country.