Pakistan makes an appeal to the UN Security Council for establishing peace in troubled region
16 Feb, 2021 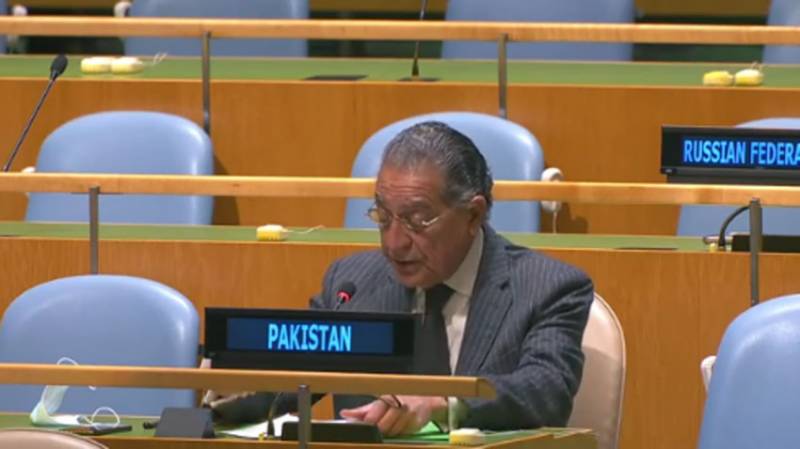 Noting that UN peacekeeping operations are currently not in a position to resolve conflicts, insurgencies and cross-border attacks, Pakistan Monday underscored the need for the Security Council to utilize its mechanisms to promote political solutions for establishing peace in troubled regions.

“UN peacekeeping has so far not been used to impose peace; but rather to help preserve peace and foster conditions for the political resolution of the underlying conflicts and disputes,” Ambassador Munir Akram told the Special Committee on Peacekeeping Operations at its first meeting of the 2021 session.

“It is, of course, another matter that the international community, including the Security Council, has been unable to find political solutions to several long-standing disputes – such as the one over Jammu and Kashmir, where one of the oldest UN Missions (UNMOGIP) is stationed – and to conflicts – such as inter- State and intra-State eruptions – that have proliferated and escalated in recent years, causing massive suffering and human rights violations, and posing threats to international peace and security,” the Pakistani envoy said.

The Special Committee, Security Council and the General Assembly must jointly formulate “realistic mandates” for peacekeeping which could be discussed by the committee’s working groups before they are adopted by the 15-member Council, Ambassador Akram said.

New capabilities, he added, could also enable the United Nations to enhance the performance of its peacekeepers.

The Special Committee’s three-week session, which opened Monday, will focus on some of the pressing issues facing roughly 90,000 military, police and civilian personnel currently serving in 12 operations around the world.

UN Peacekeeping is a “success story”, Ambassador Akram said, recalling that Pakistan had deployed more than 200,000 troops to 46 missions.

He commended the United Nations for protecting the peacekeepers during the coronavirus pandemic, expressing the hope that all peacekeepers would receive the vaccine “quickly and equitably”.

The Pakistani envoy deplored a recent incident in which United Nations observers came under attack from their mission’s co-host country — obviously referring to the firing by Indian troops from across the Line-of-Control in the disputed Kashmir region that damaged the UN vehicle carrying two UNMOGIP officers.

Ambassador Akram emphasized the role of women peacekeepers in peacekeeping, specially in the protection of civilian populations.

“It is vital for the UN peacekeepers to facilitate the transition of conflict countries and regions to the stage of peace-building. This is the endeavor of Pakistani peacekeepers wherever possible.”