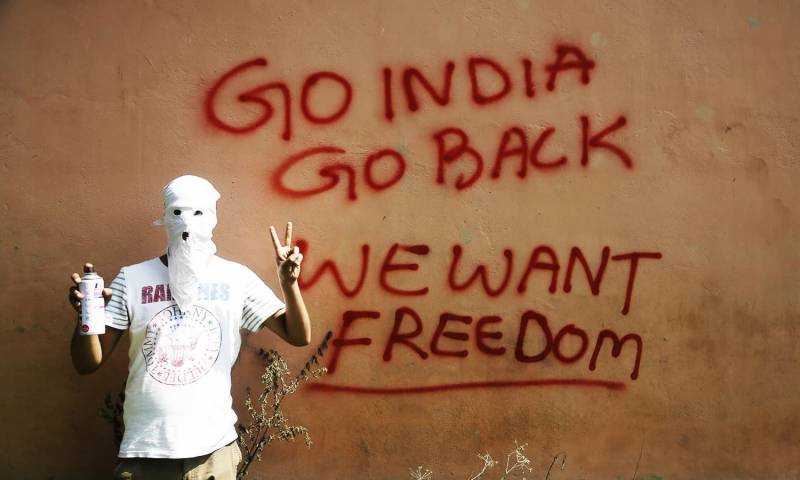 India celebrates 70 years of freedom while the people of Kashmir struggle against a brutal crackdown by New Delhi.

On Sunday, as India prepared to celebrate its 70th independence day, in Kashmir, away from the media’s glare, around 100,000 residents gathered at the funeral of a rebel who died fighting Indian soldiers.

The massive, charged crowd chanted slogans for freedom of Kashmir, a part of which is administered by Pakistan since 1947, when the two newly independent countries fought their first war over control of the former Himalayan kingdom – and left it divided.

Seventy years of Indian rule over a major part of disputed Kashmir has transformed this region into a vast garrisoned territory – and the world’s most militarised zone. More than 600,000 Indian soldiers are permanently deployed in towns and villages to control its 14 million, mostly rebellious residents.

Kashmiris never reconciled with the division of their homeland and resisted Indian rule – mostly peacefully – for four decades, in the hope that a promised UN-mandated referendum would give them a chance to determine their political future. That plebiscite never happened.

Instead, decades of denial of political rights – principally the right to self-determination, and outright deceit and constitutional fraud by New Delhi in collaboration with its elite Kashmiri allies finally sparked a Pakistan-backed mass armed rebellion in 1989.

India responded with a brutal counterinsurgency military campaign that has now transformed into a permanent state of low-intensity war against a defiant population.

Tens of thousands have been killed or maimed for life. Stories of the systematic torture of Kashmiris, young and old, men and women, have become part of common lore. Around 8,000 men have been disappeared; many from the numerous camps of the forces, after soldiers took them away from their homes. India has refused to investigate unmarked and mass graves of more than 7,000 unidentified people spread across many remote areas of Kashmir.

During the last three decades the Kashmiri people have mounted four major mass uprisings against Indian rule that commentators have likened to the Palestinian Intifada.

Hundreds of thousands mobilised for months on end hoping to turn the world’s attention to their plight. But India’s new economic potential meant that the needles of political sensitivity in powerful western capitals didn’t move like they would for Egypt’s Tahrir Square.

In a significant departure from armed resistance, and displaying a sharp awareness of the spread of Islamophobia and the changed global climate post 9/11, hundreds of thousands of Kashmiris agitated peacefully for months on end between 2008 and 2010. Rebels did not fire a single shot during those spontaneous uprisings, yet more than 200 protesters died at the hands of Indian forces.

The latest uprising against Indian rule began in July 2016, sparked by the Indian forces’ killing of a young and hugely popular rebel leader, Burhan Wani. Violent clashes between protesters and government forces crippled the region for four months, and nearly a hundred civilians were killed. Thousands were injured with shotgun pellets fired indiscriminately by troops into crowds, blinding many, as the metal shards punctured their eyes. If 2010 was memorialised as the "year of killing youth", 2016 became the "year of dead eyes" for Kashmir.

But instead of initiating a political process, New Delhi intensified its counterinsurgency, pumping thousands of more troops into the already densely militarised territory.

Young and disillusioned Kashmiris have again begun to join the rebel ranks. Nearly 200 have picked up arms since Wani’s death, officials say. They enjoy huge public support. Whenever the militants are trapped in frequent military cordons, residents, men and women, sometimes entire villages come out in support of the rebels, throwing stones at soldiers. Many have died in solidarity.

Since the armed rebellion of 1989, New Delhi set up several initiatives and groups of official interlocutors promising to find ways of restoring Kashmir’s political autonomy, short of a referendum. But successive governments have ignored recommendations that came from its own attempts to grant political rights to Kashmiris.

In its increasingly aggressive militaristic posturing towards Kashmir, Modi’s government is now saying it has begun working for a “permanent solution”.

The resistance leadership, or Pakistan — which controls a part of the disputed territory — have not been consulted. It has ignored pleas even by its own ally in the government of Kashmir for a dialogue with the resistance. Most of the resistance leaders have been put behind bars or confined to their homes while the Indian military has intensified its hunt for the rebels. More than 130 were killed since July last year with soldiers now displaying less hesitation in fatally shooting civilians who come out in support of the rebels.

Anger among Kashmiri people has been at a constant high for more than year and the youth feel left at the mercy of Indian forces, with the poorly trained and armed rebels, being no match for them. The anger has become more acute after organisations affiliated with Modi’s BJP have attempted to legally remove constitutional safeguards that prevent Indians from buying land in Kashmir.

Even pro-Indian Kashmiri political formations look weaker than ever before to push for a political process, or prevent concerted attempts to bringing about a demographic change in Kashmir, akin to what China has done in Xinjiang and Tibet.

Seventy years on from partition and the vicious cycle in Kashmir has not broken. India is “rising” but in Kashmir there’s an uprising. India needs to allow Kashmiris to dictate the terms of their destiny and their freedom – before another partition milestone passes and Kashmiris are left with little to celebrate.