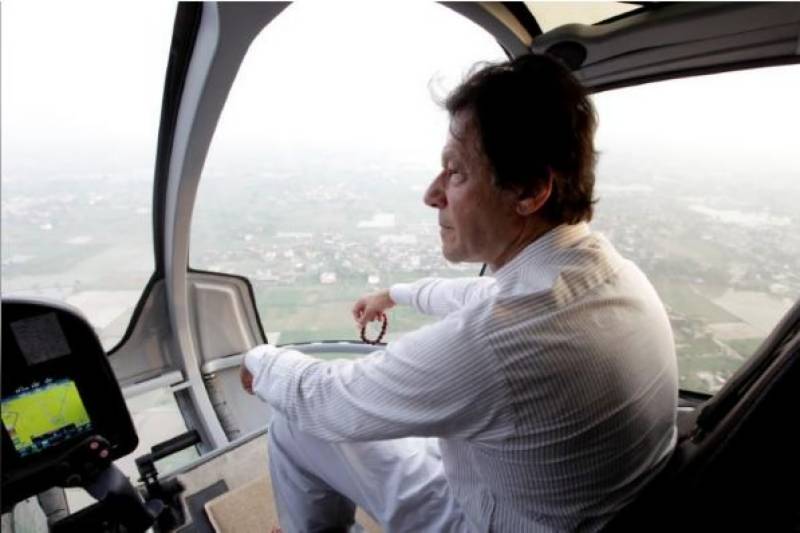 ISLAMABAD: Pakistani cricket legend Imran Khan said he was “quietly confident” of victory in a general election this month and that as prime minister, he would drive an anti-corruption and anti-poverty campaign in the south Asian nation.

The 65-year-old opposition leader, a glamorous part of the London upper crust in his younger days, also dismissed allegations that the powerful military was working behind the scenes to favor his campaign for the July 25 poll.

Oxford-educated Khan spoke in an interview on Friday as his arch foe, ousted former prime minister Nawaz Sharif, was due to return to the country and be arrested on a conviction that was handed down by an anti-graft court last week. Much of the eastern city of Lahore, the hometown of both Khan and Sharif, was on alert for protests by Sharif’s supporters.

Khan is campaigning hard on populist promises of a prosperous Pakistan that breaks away from its persistent legacy of corruption, even as he expands appeals to nationalist and religious sentiment in the nuclear-armed, Muslim nation.

As prime minister, he says he will partially model his promised anti-corruption campaign and poverty reduction programs on China, Pakistan’s traditional ally that has financed billions of dollars of infrastructure projects.

“What Pakistan has to do is follow China’s example where they lift people out of poverty,” Khan said in the interview in a private jet after a long night of campaigning in Punjab province.

“And actually we have meetings with the Chinese on all the steps they took to reduce poverty.”

Whoever wins the election will also have to navigate Pakistan’s often-fraught relations with the United States over the U.S.-backed government’s war against Taliban militants in neighboring Afghanistan.

Washington accuses Pakistan of not doing enough to root out Taliban militants who shelter on the Pakistani side of the border, and the Trump administration has recently cut foreign aid and applied diplomatic and financial pressure on Islamabad to try to force change.

“I think the longer the U.S. troops stay there, the less the chance of there being a political settlement,” Khan said. “I think the Afghans, you know, if the U.S. even gives a timetable of withdrawal, and then gets the Afghans on the table, and then with the neighbors also chipping in, I think that is the best chance of peace.”

A victory for Khan’s opposition party would mark a new political direction for Pakistan, which has been dominated by two parties – Sharif’s Pakistan Muslim League-Nawaz and the Pakistan Peoples Party founded by assassinated former prime minister Benazir Bhutto – when the military has not been in power.

More than 20 years after Khan founded his political party, the Pakistan Tehreek-e-Insaf (Pakistan Movement for Justice), the man still revered by many as captain of Pakistan’s 1992 World Cup-winning cricket team, feels the stars have finally aligned for him.

In recent years, he has mostly shed the playboy image of his younger days, marrying his spiritual adviser earlier this year and making public shows of devotion to Islam.

Supporters lined the roads leading to the three rallies Khan spoke at on Thursday night, swarming his entourage to fling rose petals as he entered each venue.

His speeches are still peppered with cricket references but also have appeals to religious conservatives in the country of 208 million. And he has courted traditional power brokers with large followings in Punjab, the country’s largest province that is key to any general election victory.

Khan’s political fortunes were transformed last July when the Supreme Court disqualified three-time premier Sharif in a case that judges only took up when Khan threatened to paralyze the capital Islamabad with his supporters.

Sharif is due to return to Pakistan on Friday to be arrested in a move that he hopes will boost his PML-N party ahead of polls, but Khan dismissed the move as futile.

He also rejected increasing allegations by both the PML-N and the PPP that the country’s “establishment” is pushing politically motivated corruption cases against their leaders.

“(The) public is demanding accountability of corrupt leaders of political parties,” Khan said. “Now, each time there is an attempt to hold them accountable, they all get together and start saying it’s anti-democratic, and in this case they are saying it is pre-poll rigging.”

Khan’s party has pulled ahead of others in one opinion poll and he said of his chances in the election: “I’m quietly confident that this time we’ll do it. I am hopeful, I am confident, but still, the match is not over until the last ball is bowled.”