Shahbaz Sharif reveals his future foreign policy to World after coming to power
13 May, 2018 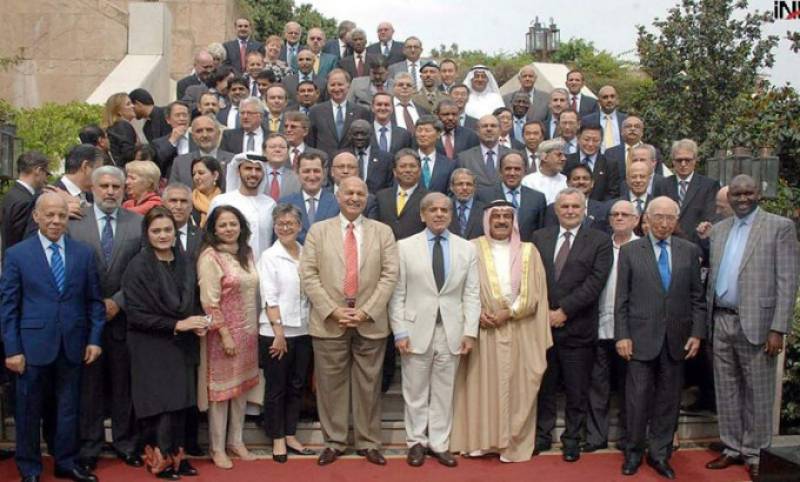 ISLAMABAD - Mian Shahbaz Sharif, Punjab Chief Minister and Pakistan Muslim League-N President, on Saturday while addressing over 60 diplomats from top countries has said that Pakistan believed in a policy of peace and has always joined hands with the world community in peace efforts in the region and across the world.

Addressing a meeting of diplomats from several countries here on Saturday, he said that peaceful relations with neighbouring countries is our priority, adding that Pakistan wants resolution of Kashmir dispute according to the aspirations of the Kashmiri people and the United Nations resolutions. The Punjab Conference was participated by ambassadors, counsellors and senior officers from economic institutions from more than 60 countries.

Shahbaz went on to say that Pakistan was playing role of a front line state in war against terror, adding that the success in war on terror was possible due to the unity and cooperation of civil-military leadership. “The whole world is witness to our sacrifices and tremendous achievements in eradicating this menace,” the PML-N president said and added today’s Pakistan is a progressive, tolerant and peaceful country. He said: “After coming to power the incumbent government took many tough decisions to overcome challenges confronting the nation.”

Shahbaz Sharif said that Pakistan is peace loving country and Pakistani people are wonderful, hard working and peace lovers. It needs leadership which has the determination to serve the people and resolve their problems.

He said, “The Pakistani political leadership needs to have consensus on the economic roadmap. Political parties and governments come and go but the economic agenda of the nation should not be changed. If PML-N gets victory in the 2018 elections and given chance to serve the people, then we will advance the agenda of development and progress of the country.” He said the promotion of ties with neighbouring countries will be the important ingredient of our foreign policy and we will advance the agenda of strengthening the economy.

Shahbaz Sharif said addressing the ambassadors from all over world is an honour for me. The objective of making this contact after being elected as the President of PML-N is to tell the world about the performance of the past and vision of the future. The PML-N chief said Pakistan had given sacrifices of more than 70,000 lives which included officers and soldiers of Pak army and security institutions and common Pakistani even children.

He said the government of PML-N has taken concrete measures to strengthen economy due to which economy was now strong enough and the GDP reached 5.8 percent which is highest in the last 13 years. Similarly the ratio of agriculture progress remained 3.8%. We are facing the challenges of deficit and we have to resolve it by promoting trade and not by taking loans.

He said investment of billions of rupees has been made in education and health sectors. He said the scholarship of 17 billion rupees have been given to brilliant students from needy families under Punjab Education Endowment Fund. Thousands of girl and boy students have been able to get jobs after getting professional education and serving the nation as doctors, engineers and adopting other professions and they are sharing the burden of their families and are a helping hand of the society.

He said they have promoted merit and 2 lakh teachers recruited on the merit. He said China made the investment of billions of rupees under CPEC in the power projects. We are working on the vision to make Pakistan a moderate, consolidated and developing country. All citizens have same rights under the constitution of Pakistan. Replying to a question he said he believes peace process is drastically needed in Afghanistan. Peace in Pakistan is directly linked to peace and stability in Afghanistan. He said CPEC is the best example of economic cooperation in neighbouring countries. He said we are thankful to China for supporting Pakistan.

He said South Asia should say goodbye to race for weapons for the bright future as a large population of South Asia is suffering from economic instability due to arms race. Answering questions of ambassadors, Shahbaz Sharif said our foreign policy will be based on peace, development and economic cooperation so that countries of the region could benefit from resources.

He informed the envoys the youth has been provided interest free loans for self-employment. Under the Land Record Information Management System record of lands has been computerized. This measure has benefited small farmers.

To another question, he said we need to speed up industrial development and end difference between imports and exports. We need to take development rate to 7 or 8 from 5.8 by focusing on industries of export items. Replying a question of the Afghan ambassador, Shahbaz Sharif said both countries have similar religious and cultural ties and we have been hosting 40 lakh of Afghan refugees for decades.

To yet another question, he said Pakistan and India are atomic powers and both countries should spend their resources for elimination of poverty, unemployment and illiteracy. He said unfortunately the people of Indian occupied Kashmir were facing worst brutality and their blood is being spilled. Time demands that the Kashmir issue should be resolved as per resolutions of UN.

Pakistan and India should sit together to resolve their matters through talks and international community should provide help in this regard. Ambassadors and high commissioners from more than 60 countries including China, Saudi Arabia, UAE, UK, Canada, India, France, Germany, Indonesia, Iran, Italy, Japan, Korea and Malaysia attended the Punjab Conference.