Shadab and Faheem revive Pakistan in Ireland's inaugural Test
13 May, 2018 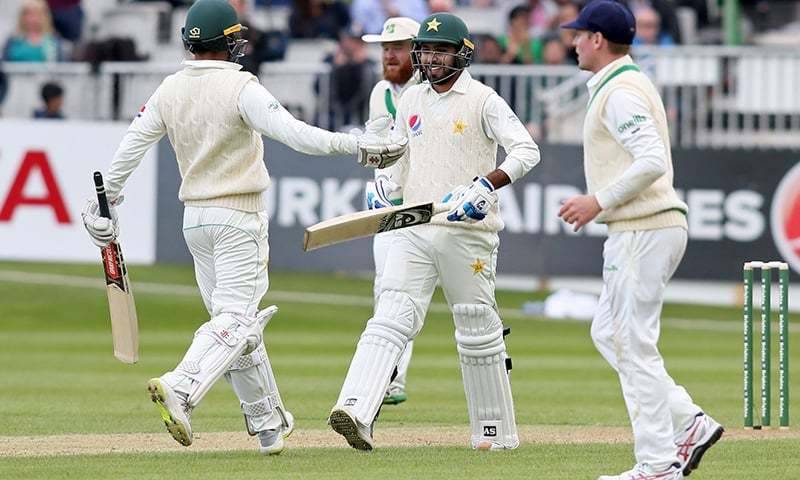 Pakistan were 268 for six when bad light and then rain brought the second day at Malahide to a premature close.

Shadab, in just his second Test, was 52 not out and left-hander Faheem 61 not out, with their unbroken seventh-wicket stand so far worth 109 runs after they had come together at 159 for six.

Pakistan, sent into bat by Ireland captain William Porterfield, lost two wickets in successive balls to be 13 for two when Asad Shafiq came in.

Shafiq then made a fine 62 against an Ireland attack that suffered from lacking a specialist spinner.

Paceman Tim Murtagh took two wickets for 33 runs from 17 overs, with Boyd Rankin returning figures of two for 58 in 17.

"It was a magic feeling to get my first wicket, I was happy for Boyd to take the first and then to get the next one, next ball was special," said Murtagh.

Meanwhile Shafiq admitted to AFP: "It was difficult conditions, especially for us.

"We are not used to playing in these conditions...The ball was moving off the pitch quite a lot. Credit goes to the Irish bowlers."

He added: "The team needed that innings (of mine) because we lost some early wickets -- that's why that innings was so important for me and for my team as well."

As for the match position, Shafiq said Shadab and Faheem had put Pakistan in the "driving seat".

"They both played outstanding innings," he said. "When they both went in we were not in a very good position but the way they both batted they really put us in the driving seat in this Test match."

There was drama at an initially sun-drenched Malahide right from Saturday's first ball of this stand-alone match.

Azhar Ali dug out a Murtagh delivery and called for a quick legside single.

Non-striker Imam-ul-Haq, like Faheem making his Test debut, found himself sandwiched between wicket-keeper Niall O'Brien and Kane in a heavy collision as he scrambled to complete the run.

The 22-year-old was left flat on the ground and needed several minutes' treatment on the field, but he recovered to face the second ball of the match, with Imam playing and missing.

But it did not take long for Ireland to make a stunning double strike on a pitch offering some sideways movement.

Rankin, the 15th man ever, and the first since Kepler Wessels (Australia and South Africa)

25 years ago, to play Test cricket for two nations after making a lone appearance for England in 2014, had an uncertain Azhar (four) edging to Porterfield at second slip.

That left Pakistan 13 for one off the last ball of the eighth over.

Barely had the crowd's cheers subsided, then Pakistan were 13 for two off the very next ball, with Imam, the nephew of selection chief and former Test batsman Inzamam-ul-Haq, lbw for seven to a Murtagh delivery that came back into him.

Shafiq though completed a 107-ball fifty before a pull off the towering Rankin went straight to square leg.

And when Pakistan captain Sarfraz Ahmed fell for 20, the tourists were 159 for six.

But Shadab and Faheem turned the tide in impressive style for two Test novices.

Faheem, however, did have a break when, on 36, he edged Rankin only for a diving Niall O'Brien to miss the catch and give Gary Wilson at first slip no chance of taking the ball.

Duly reprieved, Faheem went to fifty in just 52 balls, including seven fours, with the 19-year-old Shadab following him to the landmark in 89 balls.

When Stirling did come on, a well-set Faheem launched the part-time spinner over long-on for six. AAP