PML( N) wants action against chairman NAB according to law and constitution for money laundering charges on fake news: Marriyum
13 May, 2018 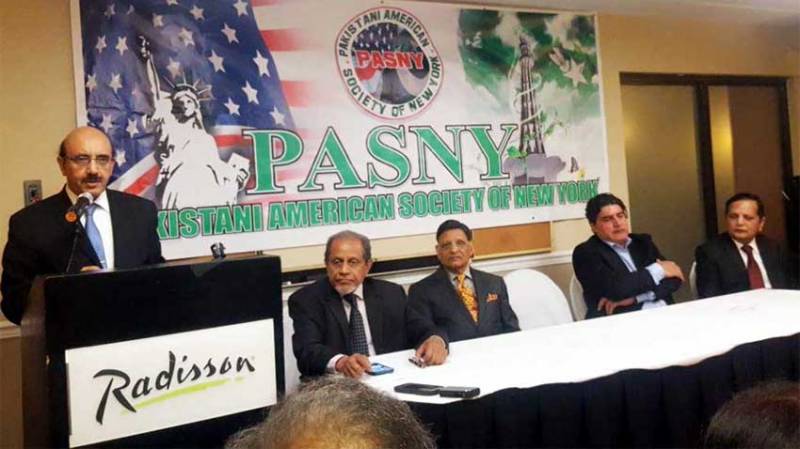 ISLAMABAD:Pakistan Muslim League Nawaz (PMLN) wants action against Chairman NAB according to the law and Constitution for leveling charges of money laundering against thrice elected former prime minister on the basis of fake news.

Federal Minister for Information and Broadcasting Marriyum Aurangzeb talking to media on the eve of inauguration of a new website of the ministry of Information and Broadcasting said the former prime minister, PML (N) and only one province were being subjected to politically motivated revenge, whereas on the other hand the darlings were acquitted from terrorism case and documents pertaining to the one who committed corruption went missing from the NAB court.

Marriyum said this news was contradicted even in 2006, adding according to the NAB laws any such news was properly verified but it could not be allowed to shame and defame anybody.

The minister demanded an end to such discriminatory and revengeful actions and said that in the democratic era accountability was done for the last seventy years but the dictators were never held accountable.

She said the dictators who ruled for ten to twelve years should also be made accountable, adding not a single development project in the country had their stamp.

Marriyum said all the state institutions would have to work within the confines of law and constitution to take the country forward.

The minister reiterated the need for the announcement of the care taker set up through consensus at the earliest and demanded that all the laws that bore the stamp of the dictators should be scraped by the parliament.

Marriyum pointed out that all the provinces fought the war against terrorism in line with the vision of the former prime minister and it was an irrefutable fact that no government and military regime waged such a decisive war against that scourge.

The minister said as compared to 2013 the year 2018 could boast of a discernible reduction in the incidents of terrorism.

The minister said in the seventy year history of the country it was witnessing the completion of a decade of uninterrupted democracy for the first time.

Referring to appearances of the former prime minister in the NAB court, she said it was unprecedented in the history of Pakistan, adding there were other cases in the NAB court but the accused were not summoned on daily basis as was being done in the case of Nawaz Sharif.

The minister said the Ehtsab commission in KPK was locked. She said Khyber Bank Corruption scandal, tsunami tree corruption and resignation of the CEO of transport Department due to rampant corruption were before everybody.

She said Pakistan belonged to all of them and she wished that the KPK had also witnessed similar development as happened in Punjab.

Marriyum said Imran Khan had wasted last four and half years in sit-ins, practicing politics of abuses and allegations. She said it was why those opposed to public welfare projects in Punjab did not want to compare them their own performance.

She said she was deeply hurt over her exclusion from the committee formed by the prime minister for selection of chairman PEMRA.

She said issuing statements as spokesman of the government was his duty and right.

She said she was asked to resign, but the minster posed a question as to how long the Prime Minister and minister would continue resigning out of fear and frustration? She said that the country had to be taken forward in conformity with law and constitution.

The minister said during the last four and half years the PML (N) government had announced development projects worth billions of rupees and even completed them but NAB never made any appearance and now that only a few months were left the institutions had started defaming the government.

Marriyum recounting the achievements of the PML (N) government emphatically declared Pakistan became a nuclear power during its rule, motorways were constructed, terrorism was surmounted, project for "saaf pani" was initiated and 11000 MW electricity was produced which not generated even in the last sixty six years.

She lamented the fact that PTI had re-introduced the politics of nineties whereas the country needed to move forward.

She said all the politicians should set some principles through the parliament not to do politics on subjects like democracy, religion, education and health. She said whenever a night raid was conducted on democracy it had re-merged with greater vitality.

Speaking about the new website "Gateway to way to Pakistan" the minister revealed that it would contain information about all the departments of the ministry and links to world renowned libraries.

She said the foreign tourists and students could benefit from the website.

She said the website WW.MOIB.Gov.PK would also have exhaustive information about national and provincial assemblies and the constitution of Pakistan. She said that the website had been choreographed keeping in view the difficulties of the foreign visitors. The website would also have details of the Access to Information Bill. She said that the rules about that bill would be notified by the next week. The minister said the summary for the constitution of Information Commission would also be sent to the prime minister.