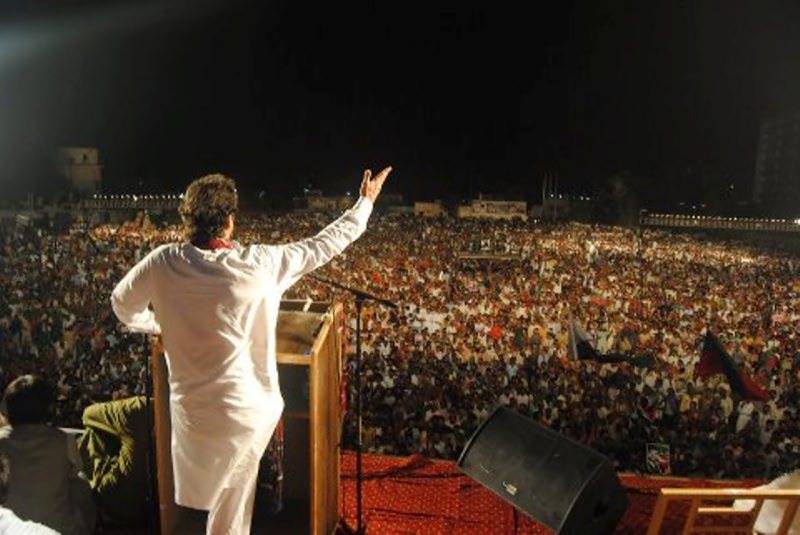 “Nawaz is part of an international plan to weaken our army,” he said, referring to a recent interview of Nawaz Sharif in leading English daily.

Khan criticised Nawaz Sharif for maintaining silence over Mumbai attacks. “Why did you not take action against the culprits when you were in office?”

“Nawaz Sharif is history and he would be making speeches from Adiala jail,” Imran said on Saturday. “Nawaz Sharif is using the language of Indian PM Narendra Modi and speaking against country’s army”

“Militant organisations are active. Call them non-state actors, should we allow them to cross the border and kill 150 people in Mumbai? Explain it to me. Why can’t we complete the trial?”

The PTI chairman said that he is contesting this year’s elections from Karachi to resolve its problems.

Imran Khan said that people used to laugh at him when he formed his party 22 years ago and ‘now it is the most popular political party in the country’.

“People kept making fun of me for the past 22 years when I first launched the PTI,” he said.

“There is no water in Karachi. It is Pakistan’s financial capital which generates 65-70% revenue,” Khan said. “We will provide water to the city and appoint experienced people at administrative posts.”

Imran said that he would contest the upcoming elections from Karachi to resolve the city’s problems.

He said that his party would devise a plan to reform Sindh’s education system. Imran said that the children of the poor would get decent education.

Mr. Khan promised to establish universities of ‘international standards’ in the province.

He said government hospitals in Karachi would also be revamped.

“Police officers like Rao Anwari who reportedly killed 440 persons was praised by Asif Zardari,” he said, while promising to bring reforms in Sindh’s policing system.

“Bilawal ask your father how he [Anwar] killed 440 people?” Imran said. “People of Karachi will not need Rangers because we will strengthen the police force.”

Imran said his government would make every effort to boost business in Karachi. “Asad Umar, our shadow finance minister will meet businessmen and devise a strategy to promote business.”

The PTI chairman lashed out at his opponents─Nawaz Sharif and Asif Ali Zardari─ and said he will bring back the money laundered abroad by the two leaders.

“China has jailed 420 ministers for their corruption,” Imran said, while promising to eliminate corruption from the country. AFP