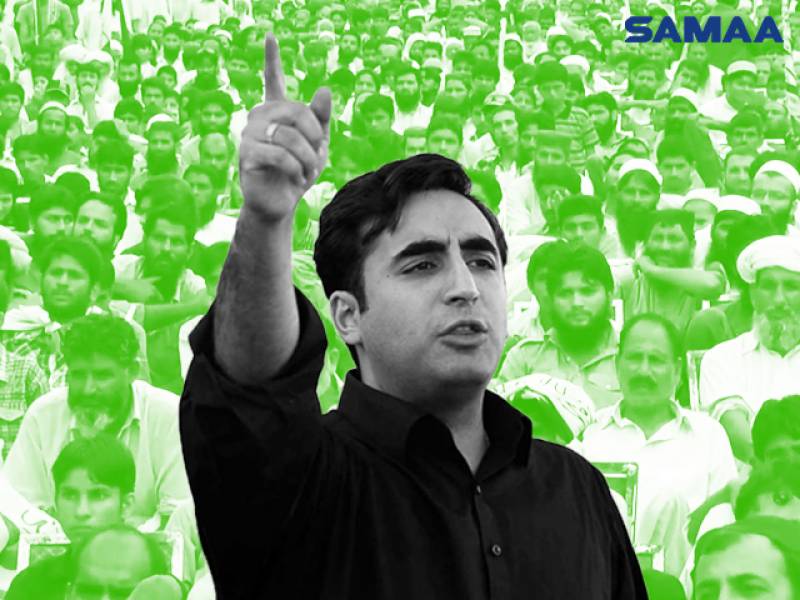 “In our struggle for an independent judiciary, we lost 14 workers on May 12 when a dictator was laughing and people of Karachi were collecting bodies,” Bilawal said while addressing his party’s rally at Bagh-e-Jinnah.

PPP held the rally to pay tribute to its workers killed during May 12, 2007 riots in which more than 50 people were killed in the city.

He blamed MQM for the violence.

“Armed wing of a political party was behind the bloodshed in Karachi, and MQM’s Karachi mayor Waseem Akhtar, who was Sindh Home Minister at that time, was the responsible,” he said.

“Our struggle was not for the sake of any individual, but for dignity of institutions,” he said.

Bilawal, whose party’s federal and provincial governments completed five-year tenure after May 12 incident, demanded justice for May 12 martyrs.

Bilawal Bhutto criticised MQM for what he called the politics of cheating, violence, opportunism and ethnicism.

“Had I known that my Lalukhet Jalsa will unite the MQM splinter groups, I would have held it earlier because atleast these political dwarfs could not have been able to disrespect politics of Karachi,” he said.

He claimed that MQM is a hurdle in Karachi’s development. “Neither they are doing anything nor allowing us to do.”

“If MQM cares about cleanliness in Karachi, why it’s not asking its union councils to permit Solid Waste Management Authority for cleanliness in other districts of Karachi.”

“It is only PPP which has built Karachi from Sohrab Goth to Tower. MQM has to be blamed for filth in the streets. MQM had power during Musharraf regime but why they didn’t initiate K-4 or Solid Waste Management plans?”

“I honestly tell you that MQM is misguiding people of Karachi in the name of ethnicism. They have been ruling over you and want to continue it,” he asserted.

Bilawal vowed to initiate more uplift projects in Karachi, and called upon masses to vote for PPP in next general elections.

“I will build university in every district of Karachi. PPP will carry out permanent planning for their rehabilitation.”

The 2018 election will decide future of Karachi. You have to decide about it. Karachi’s future cannot be changed by voting MQM groups or PTI, Bilawal said, and dubbed PTI as ‘MQM Banigala’.

“PPP served Karachi despite having no majority and difficulties. We can work without any hurdle if we got majority. We will rebuilt hearts and take out Karachi from isolation,” he said.

Bilawal said quota system in Pakistan was not enforced by Zulfikar Ali Bhutto.

“People of Karachi are told that PPP is your enemy because of the quota system, which was first notified by first prime minister Liaquat Ali Khan on Nov. 15, 1948 and last notification was issued by General Yahya on January 16, 1971,” he said.

“PPP and Zulfikar Ali Bhutto made no new legislation about quota system. These elements are misguiding the masses. They have no truth to stand on.

Bilawal Bhutto also used the occasion to criticize another rival party – the Pakistan Tehreek-e-Insaf, saying that “people of Karachi will not accept Imran Khan in the shape of another Altaf Hussain.”

He denounced PTI for ‘attacking’ PPP workers at Hakeem Saeed ground where his party was preparing to hold a rally earlier this month.

“Both MQM and PTI attempted to destroy the efforts for restoration of peace in Karachi but we defeated all their attempts.”

“PTI had announced jalsa at Mazar-e-Quaid on May 12 though they had nothing to do with May 12 massacre.” APP/AFP