Pakistanis and Kashmiris vow to fight Kashmir case in the World together
13 Aug, 2019 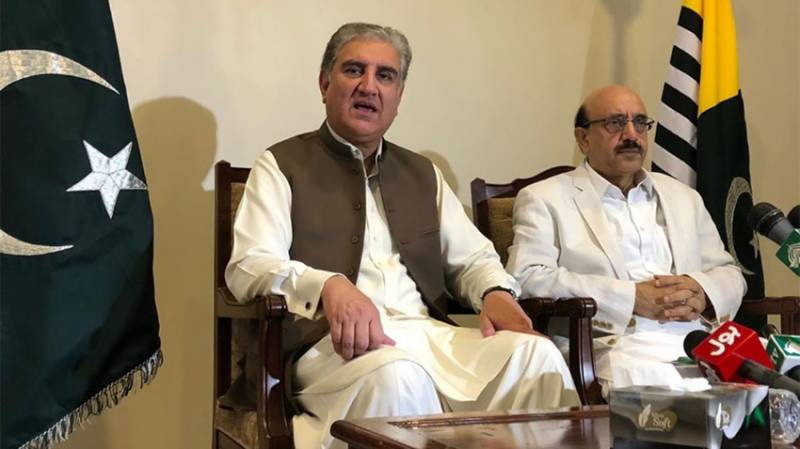 ISLAMABAD - Foreign Minister Shah Mehmood Qureshi says both Pakistanis and Kashmiris will have to fight the case for Kashmir together.

Addressing a joint news conference with President Azad Jammu and Kashmir Sardar Masood Khan in Muzaffarabad on Monday, he said this is the joint cause of whole Pakistani nation as well as Kashmiris.

He said consultation process will continue with various segments of society to resolve the situation that arose out of Indian steps to change the status quo in Occupied Kashmir.

Foreign Minister said the committee set up by the Prime Minister has been tasked to provide information on what diplomatic, political and other options we have.

Shah Mehmood Qureshi said people of all shades and colors will be included in the consultation on Kashmir and the doors of foreign office are open for anyone that could help highlight the Kashmir issue at international level.

He said the freedom struggle of Kashmiris has reached a crucial turning point.

He said Prime Minister Imran Khan in his wider outreach efforts contacted world leaders including Turkey, Iran, and Indonesia to apprise them of unilateral step taken by India to change the status of Occupied Kashmir.

The Minister said Prime Minister Imran Khan will visit Muzaffarabad on Wednesday on the occasion of Independence Day where he will address AJK legislative assembly to express solidarity with Kashmiris.

The Minister said the national political leadership is united over the issue of Kashmir.

He said if India tries any misadventure, Pakistan reserves the right to defend itself.

He said India has imposed a complete clamp down on media freedom and access to information in the held valley.

The Minister said the real agenda of India is to change the demographic composition of Occupied Kashmir.

He called upon media to exercise responsible reporting to show the world that there is no disagreement on Kashmir policy.

Earlier, President Azad Kashmir Sardar Masood Khan said Pakistan took a number of appreciable steps including suspension of bus and train services to India, downgrading of bilateral diplomatic links and passing a unanimous resolution in Parliamnent's joint session against the unilateral step of India to strip occupied Kashmir of its independent status.

He said India has sent more than one hundred and eighty thousand additional troops to invade Occupied Kashmir and imposed a total blackout in the area, so that news of its human rights violations does not reach to outside world.

Sardar Masood Khan said Indian security forces are now carrying out massacre of Kashmiris. He said India wants to colonize Kashmir and displace the native population in order to change the demographic composition of the area.

Paying tribute to diplomatic efforts of Pakistani government, Sardar Masood Khan said the endeavors have started yielding results and not only China, Turkey and other close friends have endorsed Pakistan's position on Kashmir issue, but the European Union and other great corridors of power have also expressed concern over the human rights violations in the held territory.

He said even on the Eid day, the Occupied Kashmir is under strict curfew by Indian forces and they are confined at their homes without telephone, internet and other communication facilities.

He said Kashmiris are rendering matchless sacrifices and their sacrifices will never go in vain.

The Foreign Minister said that his visit to Muzaffarabad on the eve of Eid ul Adha aims to express solidarity with the Kashmiris struggling for their right to self-determination.

Referring to his recently completed visit to China, he said that he had thorough consultation on the issue with Chinese leadership.

He said Pakistan has decided to take the issue of Kashmir again to the UN Security Council and China has assured to extend full support for this purpose.