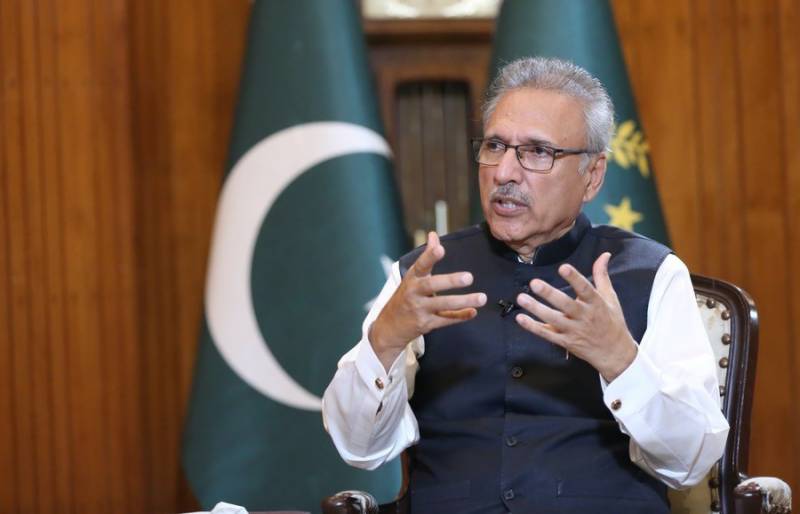 President Dr Arif Alvi Saturday said there was no harm if the Chief of Army Staff appointment is made through consultation, reported 24NewsHD TV channel

He said that although his constitutional role does not allow him to mediate between political parties, particularly on the matter of the army chief’s appointment, he is trying to reduce tensions to save democracy.

“I am trying to reduce tensions and bring all political parties to negotiating table to save democracy from derailing and improve the situation,” the president said while interacting with a group of journalists at Governor House in Lahore.

He said discussions were underway with those institutions that can improve the matters adding that dialogue should continue for the stability of the democracy in the country.

President Alvi said the constitution allows him to ask the prime minister to take a new vote of confidence but he was not in this position.

President Alvi, who belongs to Pakistan Tehreek-e-Insaf (PTI), said that he was playing his role as supreme commander of the armed forces to bring down the political temperature in the country.

“I do not do anything after consulting with PTI chairman Imran Khan, adding that the former PM is an old friend and I consider him a leader.”

President Alvi said negotiations are underway to reduce the friction and improve the situation between Imran Khan and the establishment but matters “are being kept under wraps so that things progress amicably”.

“I am playing the role of mediator as supreme commander of the armed forces but I am not a broker.”

He rued that there was a deficit of trust in institutions and that every matter is brought forward to the courts.

“And when courts make a decision, these decisions are not being respected.”

President Alvi said the institutions are being used politically and the political use of the NAB law was wrong.

Speaking about security measures being taken in the federal capital ahead of PTI’s long march to Islamabad, the president said, “Containers were used for trade across the world but in Pakistan, they have been given a new use”.

President Alvi said all political parties have demanded early elections at some point in time and added that even Supreme Court had discussed the possibility of early polls to end the political deadlock.

Responding to a question about the establishment’s role in politics, the president said he cannot rewrite history but can only try to make things better.

President Alvi questioned what is wrong with going to the election with reconciliation.

He said democracy works only because of institutions.

President said Pakistan does not want to spoil relations with any country, especially with big countries.