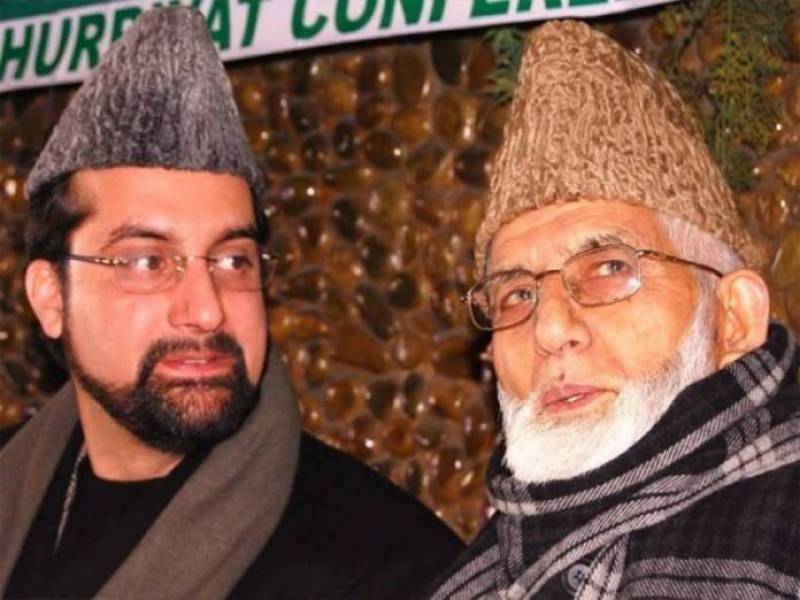 In occupied Kashmir, Chairman All Parties Hurriyat Conference, Syed Ali Gilani, has appealed to the international community and the UN to take solid steps for the settlement of the Kashmir dispute in accordance with the Kashmiris’ aspirations.

In a statement in Srinagar he deplored that Indian authorities were trampling and violating the human values in the occupied territory.

The APHC Chairman said that the Kashmir dispute had multiplied human tragedies and because of this lingering issue, millions of people were facing immense hardships and a state of uncertainty and instability was looming over the whole South Asian region.

The Chairman of Hurriyat forum, Mirwaiz Umar Farooq, has warned the puppet authorities of mass uprising if civilian killings continue in the territory.

Mirwaiz Umar Farooq in a statement issued in Srinagar said that the draconian law, Armed Forces Special Powers Act (AFSPA) was the root cause of civilian massacres in the territory.

He expressed serious concern over the unabated killings of innocent civilians across the occupied territory in the Indian forces’ action. “If the brazen killings of Kashmiris do not stop, people will be forced to hit the streets as they will be left with no alternative. All means of expressing resent against repression have been blocked and there is no hope of justice from the administrative and legal system in place,” the Mirwaiz added.

The forum Chairman also condemned the repulsive instinct of those elements playing politics over the humanitarian issue of providing justice to the eight-year-old victim of rape and murder of Kathua. “Every citizen of Kashmir should unanimously ensure that justice prevails and the guilty are booked and punished as per the law of the land, for this disgusting crime,” he said.

The Mirwaiz said also condemned the shifting of Kashmiri prisoners including Dr Muhammad Qasim Fakhtoo and Dr Muhammad Shafi Shariati from Srinagar Central Jail to various prisons in Jammu and keeping them with the dreaded criminals. “This poses a serious life threat to the prisoners. Above all, shifting them is in complete violation of the high court orders,” he added.

The forum Chairman also urged the UN High Commissioner for Human Rights to visit occupied Kashmir to take stock of the human rights scenario, stating that the UN’s Kashmir visit was long overdue. He said the UN should use its influence and build pressure on New Delhi to abolish the draconian AFSPA, which is the root cause of brutal killings and extreme violations of human rights in occupied Kashmir.

Meanwhile, in occupied Kashmir, the ongoing probe by the Crime Branch of police into rape and murder of an eight years old Kathua girl has revealed that the heinous crime was carried out to drive out the Muslim nomads from the Rasana village dominated by Hindu community.

Inspector General of Police, Crime Branch, Syed Afad-ul-Mujtaba in a media interview in Srinagar said, “The detailed status report has been submitted before the High Court. Next date of hearing is 14th March.”

Another official said that the CB in its report has stated, “Drugs were used to sedate the victim. These were purchased by one of the involved Special Police Officers from a medical shop in Kathua days before the girl was abducted.”

“In its status report, the Crime Branch has apprised the court about havaldar Tilak Raj, who washed victim’s clothes that were soaked in blood and mud before sending them for forensic test,” he said, adding that role of the sub-inspector, Anand Dutta, who was the investigative officer, and was later detained by the CB, has also been discussed in the status report.

Another official said that CB has also informed the court that Shubam, another culprit detained earlier, was not juvenile, as a team of doctors from medical college, Jammu, has declared him above 19 years of age after his physical examination.

The official said that Sanji Ram, a retired revenue officer, had been instrumental in organizing protests carried out by the Hindu Ekta Manch. “Sanji Ram is also the custodian of the premises where victim was held captive for a week,” he added.

It is to mention here that extremist organization Hindu Ekta Manch has been spearheading the protests in Kathua demanding that case be handed over to the Indian Central Bureau of Investigation (CBI).

The ministers of Bharatiya Janata Party had also met the puppet Chief Minister, Mehbooba Mufti, in Jammu on Thursday and demanded that case be handed over to CBI. APP/AFP