Escalation on LoC by India an attempt to divert world attention from Kashmir: FM
10 Mar, 2018 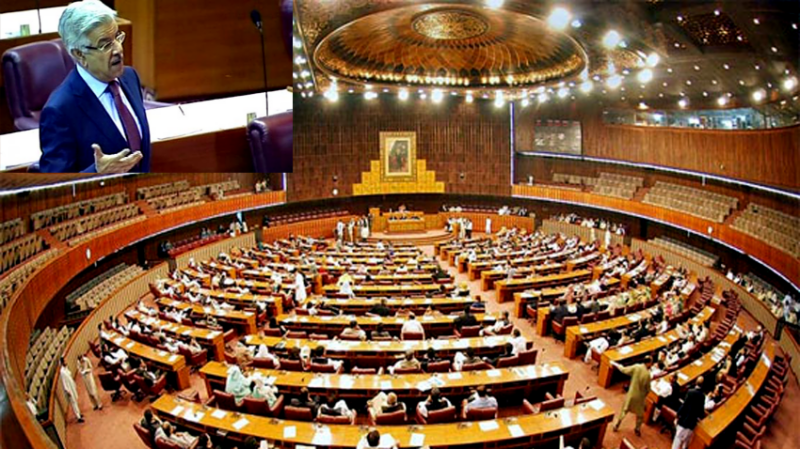 National Assembly was informed on Friday that Pakistan believes in a functioning relationship with the United States based on mutual respect and trust, which is in the interest of the region.

In a written reply in the House, Minister for Foreign Affairs Khawaja Muhammad Asif said after a negative tweet of the US President, Pakistani leadership decided that Pakistan’s response would be measured. He said that National Security Committee in its meetings afterwards took stock of the entire situation.

Khawaja Asif said, during recent high-level engagements with the visiting US delegations, they were told that the unwarranted allegations by the US President belie the cooperative history of the relationship, which served mutual interests in the region.

The Minister said despite the accusations, Pakistan remains committed to the stability of region and supports all efforts towards an Afghan-led and Afghan-owned peace process.

He said people of Pakistan are prepared to defend their honor, sovereignty and territorial integrity of the homeland.

Replying to another question, Khawaja Asif said at present, the total number of Pakistanis imprisoned in the jails of Spain is 177.

He said an officer and an official of Consulate General of Pakistan in Barcelona are especially deputed to give consular access to the Pakistani prisoners detained in different Spanish jails.

The Minister for Foreign Affairs said around 2.7 million overseas Pakistanis are in Saudi Arabia and we are trying to increase the number of Community Welfare Officers in that country to help Pakistanis facing a number of problems.

In a written reply of another question, Minister of Foreign Affairs said that the situation on the Line of Control and Working Boundary is rapidly deteriorating since 2017.

He said heavy weapons, including mortars are frequently being used by the Indian Forces, on the civilian population on the Pakistani side of the LOC and the Working Boundary.

He said that since the beginning of this year, the Indian occupation forces carried out more than four hundred ceasefire violations along the Line of Control and the Working Boundary, resulting in the martyrdom of eighteen innocent Pakistani civilians.

He said this escalation at the LoC and Working Boundary is an attempt to divert the attention of the international community from Indian atrocities in IOK.

Foreign Minister said that Pakistan maintains that the role of the United Nations Military Observers Group in India and Pakistan (UNMOGIP) is crucial to ensure peace and tranquility at the LOC. He said Pakistan has always extended full cooperation to the UNMOGIP.

Speaking on a Point of Order, the Foreign Minister said Pakistan will not become part of any foreign war in the Middle East. He said Pakistan’s policy is clear that it wants brotherly relations with all Muslim countries and is ready to resolve the differences between any two Muslim countries.The House has been adjourned to meet again on Monday at 5 p.m.