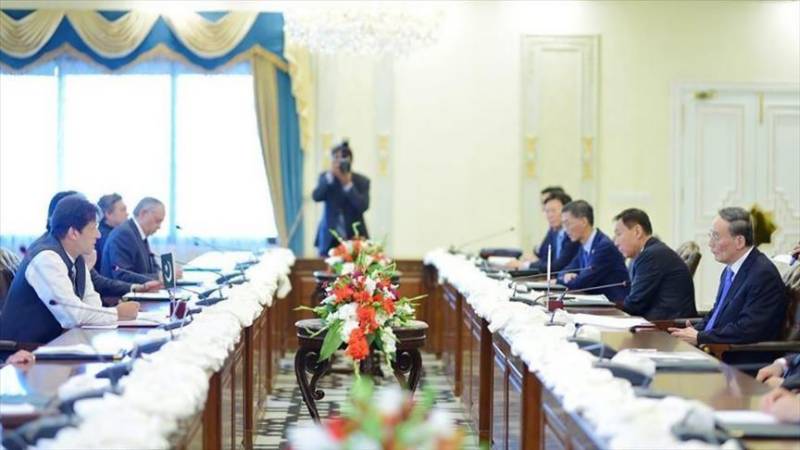 ISLAMABAD - Pakistan and China on Tuesday vowed to expedite completion of projects associated with the multi-billion-dollar China Pakistan Economic Corridor (CPEC) and also to implement the second phase of the China–Pakistan Free Trade Agreement (FTA).

Acknowledging measures taken by Pakistan, to advance the CPEC projects, China maintained that the second phase of the CPEC will pave the way for enhanced Chinese investments in Pakistan and thus will prove instrumental in consolidating Pakistan’s economic development.

The understanding was reached at a meeting between visiting Pakistani Prime Minister Imran Khan, and his Chinese counterpart, Li Keqiang at the Great Hall of the People in Beijing, a statement issued by Pakistan’s Foreign Ministry said.

On his arrival, Khan-accompanied by Foreign Minister Shah Mehmood Qureshi, and other cabinet members, said the all-weather strategic cooperative partnership between the two allies has served the fundamental interests of the two countries and contributed to peace, development and stability in the region.

''Both leaders maintained that frequent and substantive bilateral exchanges were contributing to elevating the all-weather strategic cooperative partnership to new heights and were reinforcing people-to-people ties,'' the statement said.

Terming the multi-billion-dollar China Pakistan Economic Corridor (CPEC) project “pivotal” to accelerating Islamabad’s economic development and regional prosperity, Khan assured that the expeditious completion of the CPEC projects, was the foremost priority of his government, the statement said.

Premier Li was apprised of the actions undertaken recently to fast-track CPEC projects and to push the development momentum in Pakistan’s strategic Gwadar district- a key project of the CPEC.

The $64 billion CPEC, signed in 2014, aims to connect China's strategically important northwestern Xinjiang province to the Gwadar port in southern Pakistan, through a network of roads, railways, and pipelines to transport cargo, oil, and gas.

Both leaders agreed that the implementation of the second phase of China-Pakistan FTA would lead to more trade, economic and investment opportunities between the two countries.

Khan, according to the statement, apprised Premier Li of the latest developments and the importance of urgent action by the international community to alleviate the sufferings of the Kashmiri people in the lockdown.

Gen Bajwa, it added, apprised the Chinese military leadership about consequences of the ongoing situation in the disputed region if it’s not amicably resolved for which “India needs to respect UN resolutions and ensure the human rights of Kashmiris.”