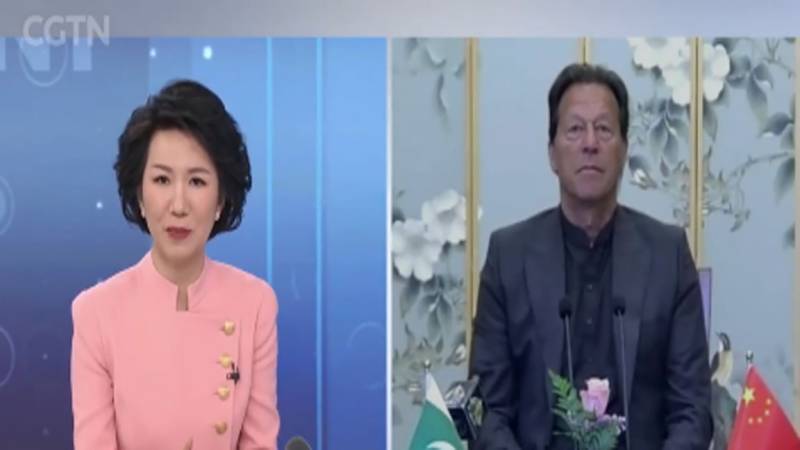 In an interview with CGTN China, he said because of our powerful relationship, the whole region has been stabled.

The Prime Minister said Pakistan-China relationship has become stronger with every passing day.

Imran Khan said he is one of the people who believe that differences should be resolved through political dialogue; however, there is an extreme nationalist government in India, and we find it very difficult to move forward specifically because of Kashmir.

He said Kashmir is the only issue with India. Rather than trying resolving the issue, India has done things worse. He said I hope that sooner or later we will be able to resolve this issue through political dialogue.

The Prime Minister said we want Pakistan to play the role which it played in 1970 when Pakistan was instrumental to getting the United States and China together. He said we will be able to get our people out of poverty if we have economic wellbeing, and this wellbeing comes with peace and stability.

To a question about China-Pakistan Economic Corridor, the Prime Minister said CPEC is extremely important. He said the Chinese investment that came in for connectivity and power generation came at a very crucial time in Pakistan. He said now CPEC is going on to the second stage focusing on industrialization, information technology and agriculture.

Imran Khan said, Pakistan's emphasis is on geo-economics with the aim to lift people out of poverty. He said we have 25 percent of our population below the poverty line, and the main consideration is to lift them up. The role model we have in mind is of China.

He said we want to learn from China about it as to how do we create wealth and then use wealth to lift people out of poverty.

Responding to a question about Afghanistan, the Prime Minister said the problem right now is the prospect of huge humanitarian crisis.

He said Pakistan, China and European countries agree that somehow likes and dislikes of the Taliban should be set aside and the only thing in all our minds should be 40 million people of Afghanistan.

He said half of them are in a very precarious position of food security. There is a prospect of famine, starvation, malnutrition. He said we agree that top priority of everyone should be the people of Afghanistan.

To a question about the Covid-19 pandemic, the Prime Minister said Pakistan is one of few countries which coped the pandemic better than the vast majority of the nations that were affected by the pandemic.

He said we are considered amongst the top three countries which coped the pandemic best of all. He said we saved the economy as well as the people from the pandemic.