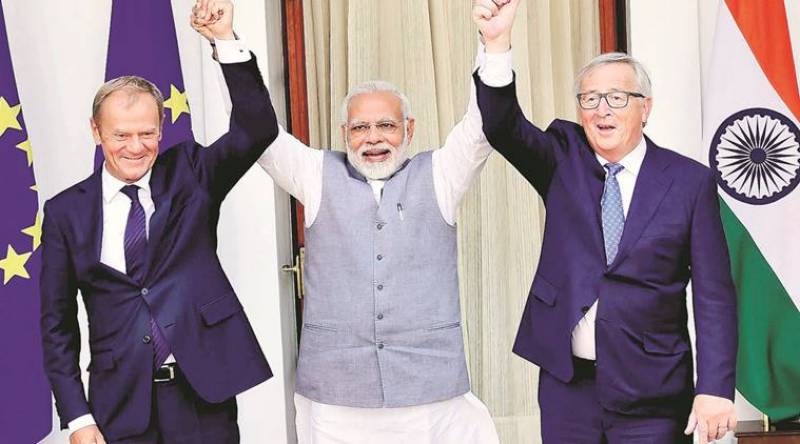 While Saeed and Lakhvi are accused of the 2008 Mumbai terror attacks, Dawood is accused of the 1993 Mumbai blasts.The announcement was made following talks between Prime Minister Narendra Modi and visiting European Council President Donald Franciszek Tusk and European Commission President Jean-Claude Juncker at the 14th India-EU summit here.

Naming of the three terrorists, who have conducted terror attacks in India leading to hundreds of deaths, is being perceived as a significant takeaway from the India-EU summit. A separate joint statement on “cooperation in combating terrorism” said,

“The leaders agreed to strengthen cooperation to take decisive and concerted actions against globally proscribed terrorists and terror entities, including Hafeez Saeed, Zaki-ur-Rehman Lakhvi, Dawood Ibrahim, Lashkar-e-Tayibba, Jaish-e-Mohammad, Hizb-ul-Mujahideen, Haqqani Network, Al Qaeda, ISIS (Da’esh) and their affiliates.During the 13th India-EU summit in March 2016, the joint statement had only mentioned the terror outfits. Addressing a joint press event with the EU leaders, Modi said, “We have agreed to strengthen our security cooperation and work together against terrorism. We will not only further strengthen our bilateral cooperation on this issue, but will also increase our cooperation and coordination in multilateral fora.”

Tusk said, “We have adopted a joint declaration on counter-terrorism in which we agreed to counter violent extremism and radicalisation, particularly online, and to deal effectively with the threat by foreign terrorist fighters, terrorist financing and arms supply.”

It said that “recalling the November 2008 terror attacks in Mumbai, the leaders called for the perpetrators of these attacks to be brought to justice. They further called for greater unity, stronger international partnership and concerted action by the international community in addressing the menace of terrorism.”