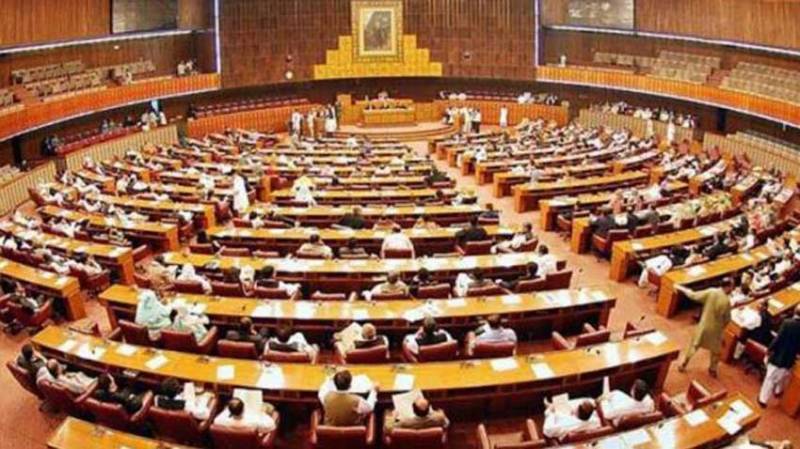 ISLAMABAD - The joint session of the Parliament continuing discussion on situation of occupied Kashmir today.

The session is also discussing the Indian government's move to revoke Article 370 in the Indian Constitution which grants special status to the State of Jammu and Kashmir.

Taking part in the debate, Minister for Human Rights Dr. Shireen Mazari said Indian attempts to change the status of Occupied Kashmir are not only illegal, but they also defy the Geneva Convention which attributes any change in demographic composition of held territory as war crime.

She said with the revocation of Articles 370 and 35-A India has violated the Shimla Accord, the decisions of its superior courts and all international norms. Even the Supreme Court of India gave a ruling in 2016 that central government cannot change these articles without the approval of state government.

The Minister said the atrocities perpetrated by Indian security forces on innocent Kashmiris are tantamount to genocide of native population and we must make efforts to persuade international community to take action and stop India from these acts.

She said it is responsibility of the international community to intervene when there is a serious risk of genocide and ethnic cleansing.

Referring to Indian use of cluster bombs on innocent population in Azad Kashmir, she said both Pakistan and India are signatories to Convention on Cluster Munitions and India has violated this international agreement. She said our government has written a letter to UN High Commissioner for Human Rights and apprised of these violations of human rights. Our government has also demanded the UN to set up an independent investigative committee to find out the human rights abuses being committed in Indian held Kashmir.

Dr. Shireen Mazari said government will use all international forums to highlight the gravity of the situation and will also make efforts for calling a special meeting of the UN Security Council.

She said we have to inform the world community that Pakistan will not remain silent if any misadventure is done against us.

Leader of Opposition in Senate Raja Zafar-ul-Haq said India had been preparing for this step for long and already paved the way for domestic and international public opinion in its favor. Pakistan needs to mobilize the international public opinion against this step as Kashmiris are suffering immense human rights abuses by an occupying force. He said the UN Charters binds its members to avoid such steps that are discriminatory to native populations.

JUI-F Parliamentary Leader Maulana Asad Mehmood said Pakistan stands with its Kashmiri brethren steadfastly. He said a strong message should be sent from Pakistan parliament that all political parties are on same page to condemn the Indian step. He said the international community should be persuaded to play a bigger role by forcing India to stop the oppression of innocent Kashmiri people. He questioned that if the US with all its military might could not succeed in occupying Afghanistan, how could India do the same in Kashmir.

Amir Jamaat-e-Islami Siraj ul Haq said India cannot suppress the right to self-determination of Kashmiris by use of brute force. He said India planned well ahead to carry out its plan of changing the demographic composition of Kashmir to annex the land. He warned that if a strong response is not given to India now, it can claim Azad Kashmir and Gilgit Baltistan in the next phase. Siraj ul Haq said the lives and death of Kashmiris are with Pakistan and they see their future with us. He said it seems India revoked the articles granting special status to Kashmir in connivance with the US and other world powers.

He urged the government to organize an international conference in Islamabad to effectively highlight the issue of Kashmir to the world delegates.

Co-Chairman Pakistan Peoples Party Asif Ali Zardari said his party’s was founded on the sacrifices of Kashmiris. He said today pro-government Muslims of India have also realized that two-nation theory was right that granted a separate homeland to Muslims. Asif Ali Zardari said after the illegal annexation of Kashmir by India, we need to accelerate the diplomatic efforts. He paid rich tributes to the sacrifices of Kashmiris fighting against the illegal Indian occupation and preferring to be buried in Pakistani flags. Asif Ali Zardari said the step taken by India to strip Kashmir of its independent status has buried the secular status of the country. He predicted that separatist movements all across India will gain momentum with this step.

Federal Minister for Science and Technology Fawad Chaudhary said the world will feel the heat if India and Pakistan go to war over Kashmir. He said Pakistan will not let India change the demographic composition of Kashmir. He said diplomatic relations with India need to be reviewed in the light of recent developments in Kashmir.

He urged all political parties to shun their differences and become united on the issue of Kashmir.

Veteran PPP leader Raza Rabbani expressed fear that India will now do ethnic cleansing of Kashmiri population to strengthen its control on Kashmir. He said this will be construed as state terrorism should India continues its policy unabated. Raza Rabbani said narrative on suppression of Kashmiris voices and their genocide by the occupying authorities must be promoted in the Western world. He suggested to change the course of foreign policy in order to achieve meaningful results. Raza Rabbani said an independent foreign policy based on Pakistan’s national interest and security, drawing the country away from the role of a client state, rebuilding Pakistan’s credibility in international corridors of power, refusing to accept India as regional policeman, stopping the realignment of foreign policy towards Washington and looking towards Asia as our future will result in diplomatic successes.

He also demanded the government to constitute a parliamentary party to take forward the foreign policy of Pakistan.

Khalid Khan Magsi of Balochistan Awami Party said we as a nation need to strengthen our identity and be able to convince the world of our viewpoint. He said India is trying to strengthen its occupation and we should not be shied away from war, in order to stop this happening.

Minister for Railways Sheikh Rashid Ahmad said the Indian action to revoke the independent status of Kashmir will spur a new spirit of freedom in Kashmiris. He said the freedom movement will not remain limited to Kashmir only. Rather, it would expand to UP and CP areas of India as well. Sheikh Rashid Ahmad said perhaps history is going to take a decision which will write a new chapter in the freedom struggle of Kashmiris.

PML-N MNA Khawaja Asif said our jugular vein is in the grip of enemy and the whole nation needs to speak with one voice to counter the Indian aggression. He said we need to rise above personal interests and politics to resolve this national issue. Khawaja Asif said the hands of Modi are stained with the blood of Muslims and BJP wants to turn India into a Hindu state. He said a message should be sent from parliament that is reflective of the aspirations of the nation.