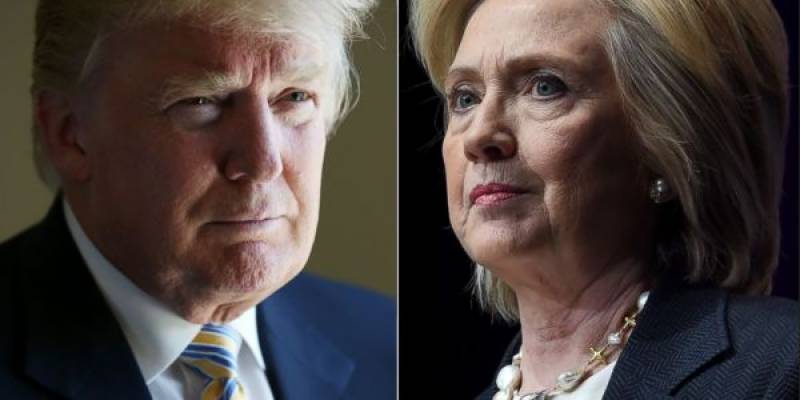 NEW YORK: (APP): US Republican presidential nominee Donald Trump has closed in on his Democratic rival, Hillary Clinton, in the latest national poll from Reuters/Ipsos.

Trump trailed Mrs Clinton in all of the major polls throughout the week, but results on Saturday appear to indicate the presidential race may be much closer than once believed.

The poll found that 40 per cent of likely voters support Trump, while 39 per cent back Ms Clinton for the week of August 26 through  September 1. Ms Clinton's lead has declined from an eight-point lead, according to the poll.

Trump's favour among Republicans has also bounced six percentage points to 78 per cent over the past two weeks, despite controversial staff shake ups and his seemingly wavering stance on immigration. In a

major policy speech on Wednesday, Trump seemed to win back Republicans' enthusiasm as he vowed to deport millions of undocumented immigrants during his "first hour" as president.

The new poll comes amid news that the FBI released details of Ms Clinton's interview with investigators regarding emails kept on her private servers - an issue that has plagued the Clinton campaign from the onset. But Trump still lacks the party support held by Mitt Romney, who was the party's candidate in 2012, who had 85 per cent of support

from Republicans at this stage in the election.

Mrs Clinton has been accused of mishandling classified information while working for the State Department, but the report attributes her mismanagement of the emails to a concussion suffered in 2012.

"Clinton said she received no instructions or direction regarding the preservation or production of records from State [Department] during the transition out of her role as Secretary of State in 2013,"

"However, in December of 2012, Clinton suffered a concussion and then around the New Year had a blood clot," it adds. "Based on her doctor's advice, she could only work at State for a few hours a day and could not recall every briefing she received."

Trump said that the details in the notes "defy belief" and his campaign maintains that the controversy should disqualify her from becoming president.