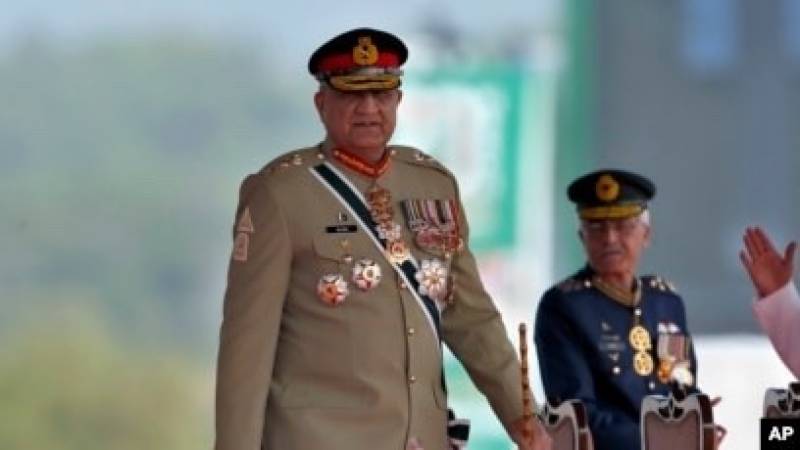 Pakistan’s military chief Saturday slammed Russia’s military attack on Ukraine, calling for immediate cessation of what he described as a “huge tragedy” being inflicted on a smaller country.

General Qamar Javed Bajwa’s rare criticism of Moscow evidently was at variance with that of his country’s embattled prime minister, Imran Khan, who has advocated Islamabad’s neutrality in the conflict and refused to criticize Russian President Vladimir Putin’s actions.

“Sadly, the Russian invasion against Ukraine is very unfortunate as thousands of people have been killed, millions made refugees and half of Ukraine destroyed,” Bajwa told an international security dialogue in Islamabad.

“Despite legitimate security concerns of Russia, its aggression against a smaller country cannot be condoned. Pakistan has consistently called for an immediate cease-fire and cessation of hostilities,” Bajwa said.

The general advocated support for an urgent dialogue between all sides to resolve the conflict, praising the Ukrainians for effectively resisting the Russian aggression.

Bajwa used the example of the Russia-Ukraine conflict in his televised speech to caution Pakistan’s massive arch-rival India against launching another war with his country.

“This has given a heart to smaller countries that they can still defend their territory with smaller but agile forces against an aggression by a bigger country by carrying out selective modernization in equipment and adopting noble ideas,” the Pakistani military chief said.

Critics noted Bajwa’s comments have marked a significant departure from the policy Prime Minister Khan has been advocating on the Ukraine crisis.

Khan, who faces an opposition-launched parliamentary no-confidence vote Sunday, maintains Pakistan made a mistake by joining the West during the Cold War and wants to remain neutral in the Russia-Ukraine conflict to have good ties with both the countries.

The Pakistani leader has refused to condemn Putin and publicly criticized Western diplomats in Islamabad for urging his government in a rare joint letter last month to denounce Moscow’s aggression against Kyiv.

“Why would we condemn Russia? Are we your slaves that we would do whatever you say?” he asked in televised speeches to large recent public rallies organized by his ruling party.