Pakistan US close cooperation must for regional peace: US Senator
1 Nov, 2017 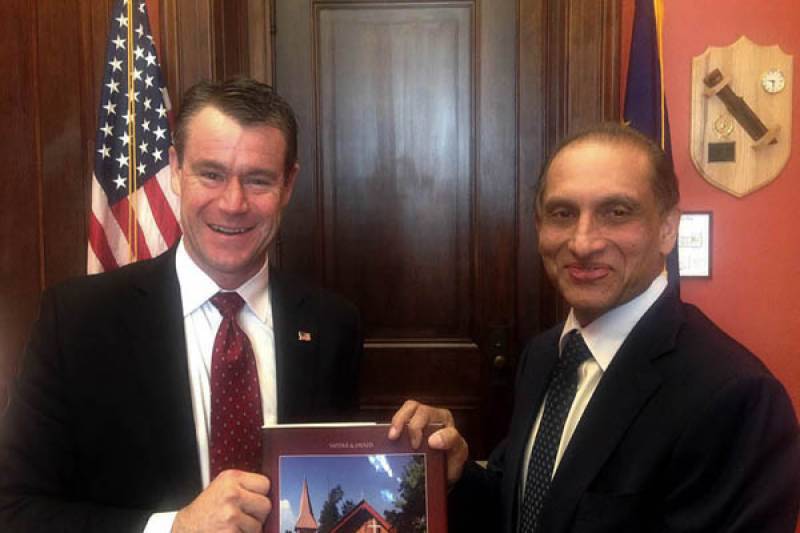 WASHINGTON - US Senator from the ruling Republican Party, Todd Young, has stressed the need for close cooperation between Pakistan and the United States for ensuring peace and stability in the region.

The Republican Senator, who is a member of the Senate Foreign Relations Committee, made these remarks during a meeting with Pakistan’s Ambassador the United States Aizaz Chaudhry.Ambassador Chaudhry briefed the Senator about the Pakistan-US relations and shared Pakistan’s perspective on the situation in South Asia in the wake of the new regional approach that President Trump unveiled in August.Pakistan has conveyed to the United States its reservations over the new policy and has made it clear that it was taking action against all terrorist groups without discrimination as it was for its own security and stability.

The new US South Asia policy has evoked strong reaction in Pakistan where people believe that due recognition has not been given to the sacrifices made by the country and its people in fighting the global war on terrorism.

Pakistan has lost more than 60,000 lives, including law enforcement personals, and its economy has suffered direct and indirect losses of over $100 billion.

Ambassador Chaudhry noted that Pakistan and the United States had a long history of working together to achieve mutual interests and meet common challenges.

As the two countries celebrate 70 years of diplomatic relations, a broad-based partnership between Pakistan and the United States remains vital to the achievement of their common strategic and regional objectives, he added.Ambassador Chaudhry highlighted the upward trajectory of Pakistan’s economy, noting that Pakistan’s large and growing middle class made it an attractive destination for foreign investors.

He informed Senator Young, who also deals with commerce and economic issues in the Senate, of the enormous potential for mutually beneficial economic cooperation between Pakistan and the United States.

Senator Young thanked Ambassador Chaudhry for his detailed briefing and stressed the need for close cooperation between Pakistan and the United States for peace and stability in the region.