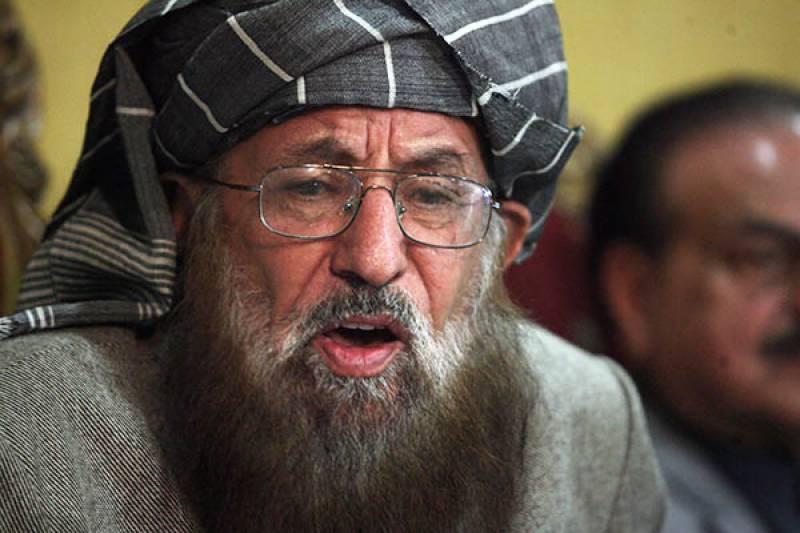 PESHAWAR: The Afghan government has been asking Jamiat Ulema-e-Islam-Sami (JUI-S)  chief Maulana Samiul Haq to approach the Taliban for peace in the country but that will not help as long as US forces are present there, the party’s spokesperson said on Wednesday.

“But even if he [Haq] approaches the Taliban, the Afghan nation will not accept foreign troops’ presence in their country,” he added.

Shah said Ghani and Zakhilwal were seeking Haq’s assistance because they believed he was the only person in Pakistan who could help restore peace in their country.

He added that the Afghan president and the ambassador had repeatedly contacted Haq, but the JUI-S had made it clear that peace was not possible in the presence of the US troops in Afghanistan.

“The Afghan government is confined to the district headquarters only and rest of the country is being run by the Afghan Taliban,” said Shah.

“The Afghan nation stands by the Taliban. The moment the foreigners leave, peace will automatically be restored across Afghanistan,” he asserted.

“Similar gatherings will also be held in South Waziristan, Sadda and Jamrud where the public will be asked if they want the tribal areas to be merged with Khyber Pakhtunkhwa (K-P).”

Later, Shah told reporters at the Peshawar Press Club that the Muttahida Majlis-e-Amal (MMA), an electoral alliance of religious parties formed for the 2002 elections, could only be revived if all the parties agreed on common objectives, not on an individual’s wishes, indirectly referring to Jamiat Ulema-e-Islam-Fazl (JUI-F) chief Maulana Fazlur Rehman.

“One meeting has been held to discuss the MMA’s revival, but there’s a long way to go,” he added.

Earlier, JUI-F Jamrud President Maulana Ateeq announced that he was joining the JUI-S.