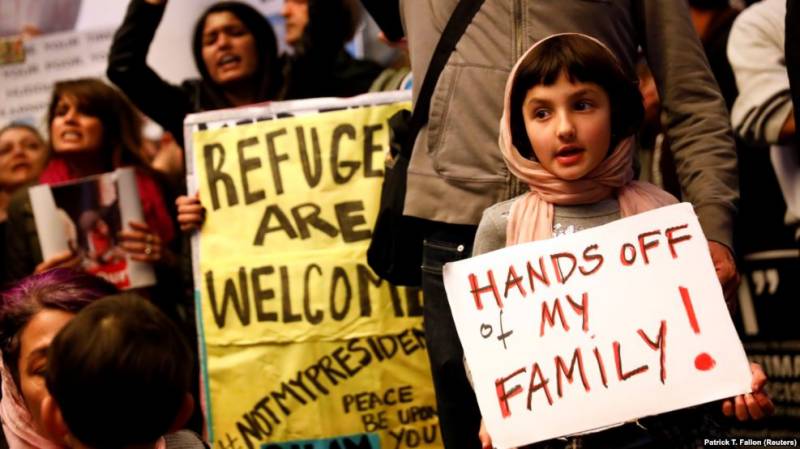 WASHINGTON DC: US diplomats added their voices Monday to a chorus of protest against President Donald Trump’s decision to suspend refugee arrivals and ban visitors from seven Muslim countries.

Dissident officials are drafting a memo to submit through the US State Department’s “dissent channel,” in a dramatic first public sign of bureaucratic resistance to Trump’s policy.

“I think they should either get with the program or they can go,” Trump’s White House spokesperson Sean Spicer told reporters, scathingly dismissing the rumblings of discontent.

The channel has been used since the Vietnam War era to allow staff to speak out, but observers said it was extraordinary to see such a move so early in the life of an administration.

Trump’s choice for secretary of state, former ExxonMobil chief Rex Tillerson, has not yet been confirmed by the Senate and a swath of senior State Department positions are unfilled.

The department’s acting spokesperson, Mark Toner, said the dissent memo has yet to be delivered. “We are aware of a dissent channel message regarding the Executive Order titled ‘Protecting the Nation from Foreign Terrorist Entry into the United States’,” he said.

Toner described the channel as a “longstanding official vehicle for State Department employees to convey alternative views and perspectives on policy issues.”

Trump signed the executive order on Friday, triggering mass protests at US airports, as arriving refugees and travellers from seven mainly Muslim countries were turned away.

Officials would not release a copy of the memo, nor say how many diplomats and State Department civil servants have signed, but angry staff had already leaked a draft to media.

According to the respected national security blog “Lawfare,” which published a draft copy, “hundreds of foreign service officers are planning to be party to the dissent memo.”

In the draft, the signatories warn that Trump’s executive order – issued a week after he was sworn in, with little consultation – will not make America safer from extremists.

Instead, they warn, the policy “runs counter to core American values” and will only to boost militant propaganda while offending vital Muslim allies in the fight against terror.

Under Trump’s order, a refugee program that was on course to admit 110,000 of the world’s most vulnerable people this year is suspended for 120 days and the target slashed to 50,000.

Refugee arrivals from war-torn Syria are halted indefinitely and travellers – whether visitors or would-be migrants – from seven mainly Muslim countries are barred for 90 days.

After this period, a new form of what Trump has called “extreme vetting” will still limit arrivals from Iran, Iraq, Libya, Somalia, Sudan, Syria, Yemen and perhaps beyond.

“When the 220 million citizens of these countries lose the opportunity to travel to the US overnight, hostility to the United States will grow,” the draft memo warns.

Washington will lose influence over young visitors who could be future leaders in the Islamic world, “including those for whom this may be a tipping point towards radicalisation.”

Spicer dismissed the concerns as “blown out of all proportion” and argued that the majority of American voters back the newly elected president’s efforts to ensure their safety.

According to the draft, nationals from the targeted countries do not just use US visas for vacations but for life-saving medical treatment and contact with relatives.

In scathing language, the diplomats call Trump’s call for visas only to be issued to travellers who probably pose no threat as a “high, vague and nebulous bar.”

“Banning travelers from these seven countries calls back some of the worst times in our history,” they warn, citing the internment of Japanese-Americans during World War II.

And they insisted there are other ways to boost US security without resorting to draconian bans on entire nationalities. “We do not need to alienate entire societies to stay safe,” they argue. “We are better than this ban.”

Trump has defiantly stood by both the ban and his decision to introduce it with little or no consultation with Congress or US agencies, leaving long-time Washington insiders stunned.