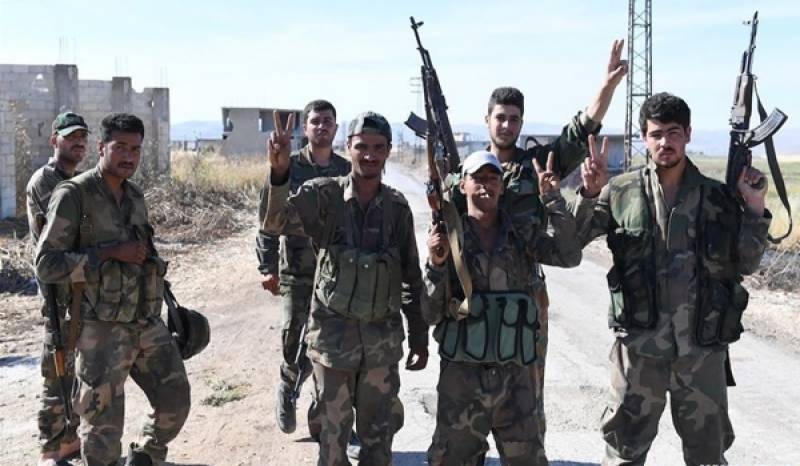 TEHRAN (FNA)- A senior Syrian military analyst said that the army has arrested nearly 30 foreign intelligence agents during the operations to take back the strategic town of Kafar Naboudeh in Northern Hama.

The Arabic-language website of Sputnik news agency quoted Brigadier General Ali Maqsoud as saying on Thursday that the Syrian army tactically withdrew from Kafar Naboudeh in Northern Hama after killing over 200 terrorists in three massive offensives by them.

He added that the terrorists reinvigorated their positions immediately after arriving in the town with the support of the foreign experts and intelligence officers of several countries, including Turkey and Israel.

Maqsoud said that the Syrian army surrounded a large number of terrorists in counter attacks, detained 25 to 30 foreign intelligence officers, adding that militants launched several attacks to free the foreign agents but were forced to retreat.

According to Sputnik, the western states seem to be making suspicious moves, including false-flag chemical attacks in Idlib province to blame the Syrian government and force the Damascus army to free these foreign agents.

In a relevant development on Monday, the Syrian army, supported by the air force, repelled a heavy offensive by Tahrir al-Sham al-Hay'at (the Levant Liberation Board or the Al-Nusra Front) to regain control of the strategic town of Kafar Naboudeh in Northwestern Hama, killing at least 30 militants.

Sputnik reported that Tahrir al-Sham terrorists attacked the Northeastern parts of Kafar Naboudeh in Northwestern Hama from the town of al-Qassabiyeh in Southern Idlib.

It added that the army forces repulsed the attack after heavy clashes and inflicting tens of tolls on the terrorists, most of them suicide attackers, and destroying two armored vehicles.

The Russian-Syrian air forces also pounded the terrorists' supply lines from the town of Kafar Zita to al-Habit, Khan Sheikhoun and Kafar Nubl and al-Qasabiyeh between Hama and Idlib, inflicting heavy damage on them.

Based on other reports, the Syrian air force also smashed a military convoy of terrorists, consisting of 6 military vehicles, from the town of Khan Sheikhoun in Southern Idlib to the town of al-Habit.

The Arabic-language al-Watan newspaper, meantime, reported that 3 groups of Jeish al-Izza terrorists were held captive during the liberation operations in Kafar Naboudeh, adding that the Syrian army troops advanced towards the town of al-Habit in Northern Hama after gaining back control of the region.