World No Tobacco Day being observed today
31 May, 2018 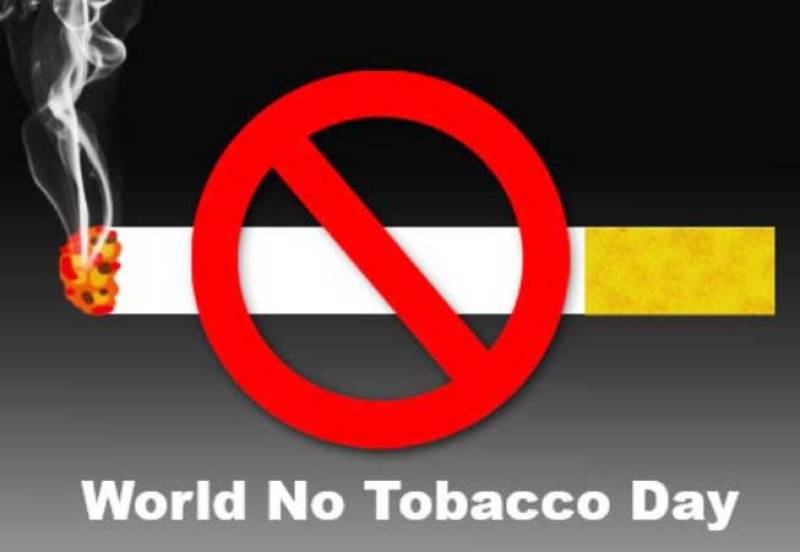 Every year, on 31 May, WHO and partners mark World No Tobacco Day (WNTD), highlighting the health and other risks associated with tobacco use, and advocating for effective policies to reduce tobacco consumption.The focus of World No Tobacco Day 2018 is "Tobacco and heart disease." The campaign will increase awareness on the:

link between tobacco and heart and other cardiovascular diseases (CVD), including stroke, which combined are the world’s leading causes of death;

feasible actions and measures that key audiences, including governments and the public, can take to reduce the risks to heart health posed by tobacco.

World No Tobacco Day 2018 coincides with a range of global initiatives and opportunities aimed at addressing the tobacco epidemic and its impact of public health, particularly in causing the death and suffering of millions of people globally. These actions include the WHO-supported Global Hearts and RESOLVE initiatives, which aim to reduce cardiovascular disease deaths and improve care, and the third United Nations General Assembly High-level Meeting on the Prevention and Control of NCDs , being held in 2018.

How tobacco endangers the heart health of people worldwide

World No Tobacco Day 2018 will focus on the impact tobacco has on the cardiovascular health of people worldwide.

Tobacco use is an important risk factor for the development of coronary heart disease, stroke, and peripheral vascular disease.

Despite the known harms of tobacco to heart health, and the availability of solutions to reduce related death and disease, knowledge among large sections of the public that tobacco is one of the leading causes of CVD is low.

Facts about tobacco, heart and other cardiovascular diseases

Cardiovascular diseases (CVD) kill more people than any other cause of death worldwide, and tobacco use and second-hand smoke exposure contribute to approximately 12% of all heart disease deaths. Tobacco use is the second leading cause of CVD, after high blood pressure.

The global tobacco epidemic kills more than 7 million people each year, of which close to 900 000 are non-smokers dying from breathing second-hand smoke. Nearly 80% of the more than 1 billion smokers worldwide live in low- and middle-income countries, where the burden of tobacco-related illness and death is heaviest.

The WHO MPOWER measures are in line with the WHO Framework Convention on Tobacco Control (WHO FCTC) and can be used by governments to reduce tobacco use and protect people from NCDs. These measures include:

Monitor tobacco use and prevention policies;

Warn about the dangers of tobacco by implementing plain/standardized packaging, and/or large graphic health warnings on all tobacco packages, and implementing effective anti-tobacco mass media campaigns that inform the public about the harms tobacco use and second-hand smoke exposure.

Enforce comprehensive bans on tobacco advertising, promotion and sponsorship; and

Raise taxes on tobacco products and make them less affordable.

Goals of the World No Tobacco Day 2018 campaign

Highlight the links between the use of tobacco products and heart and other cardiovascular diseases.

Increase awareness within the broader public of the impact tobacco use and exposure to second-hand smoke have on cardiovascular health.

Provide opportunities for the public, governments and others to make commitments to promote heart health by protecting people from use of tobacco products.

Encourage countries to strengthen implementation of the proven MPOWER tobacco control measures contained in the WHO FCTC.

Every minute, smokers get through nearly 11 million cigarettes and 10 die from the habit, in an industry that generates billions of dollars.

Here are some facts and figures ahead of the UN’s World No Tobacco Day on Thursday.

There are around one billion smokers in the world, about a seventh of the global population, according to World Health Organization (WHO) and other estimates.

China has the highest number: From its population of 1.3 billion, about 315 million are smokers and they consume more than a third of the world’s cigarettes, the WHO said in a report last year. Indonesia has the highest proportion of smokers at 76% of men aged over 15 years.

About 80% of the world’s smokers live in low- and middle-income countries and 226 million of them are considered poor.

Tobacco is the leading cause of preventable death, experts say. Active or passive smoking kills more than seven million people every year, according to the WHO, with tobacco consumption blamed for the death of on average one person every six seconds.

Cancers, heart attacks, strokes and lung disease are the main diseases associated with tobacco. Over the 20th century tobacco claimed 100 million lives - more than the 60-80 million deaths during World War II and the 18 million in World War I combined.

At current rates tobacco could account for up to a billion deaths in the 21st century, the WHO says. Smoking uses up almost 6% of world spending on healthcare as well as nearly 2% of global GDP, according to a January 2017 study in the scientific journal Tobacco Control. This amounted to $1.436 billion globally in 2012, 40% borne by developing countries, it says.