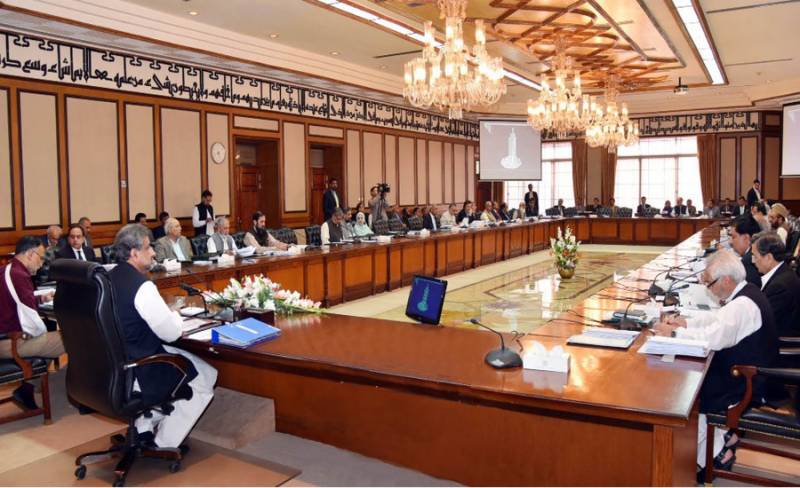 The Cabinet ratified the following:-

- Decisions taken by the Cabinet Committee on Privatization (CCOP) in its meeting held on 25-05-2018. - Decisions taken by the Economic Coordination Committee (ECC) of the Cabinet in its meeting held on 30th and 31st May, 2018. - Decisions taken by Cabinet Committee for Disposal of Legislative Cases (CCLC) in its meeting held on 29-05-2018. - Decisions taken by Cabinet Committee for Disposal of Legislative Cases (CCLC) in its meeting held on 30-05-2018. - The Cabinet accorded approval to sign Agreements of Shanghai Cooperation Organization during the Heads of State Meeting at Qingdao China to be held on 9-10 June, 2018. - Appointments of Chairman (BS-21) in Drug Court Balochistan, Quetta and appointment of Member (Engineering) in Capital Development Authority, Islamabad were approved. - Approval for placement of University of Islamabad Bill, 2017 before Parliament was also accorded. - Appointment of Auditors for Financial Year ending on 30th June, 2018 in Securities and Exchange Commission of Pakistan (SECP) was approved. - Cabinet also accorded approval for establishment of Public Private Partnership Authority. - Amendment in Rules of Business, 1973 in Pursuance of Cabinet Decision in Case No.249/17/2018 dated 25th April, 2018 was approved. - The Cabinet, while discussing the paucity of water for the Kharif season crops, approved a proposal for provision of power to the farmers operating tube-wells at a flat rate for next three months. - Nomination of Sher Afgan Khan, Additional Secretary as Director on Board of Directors of Oil & Gas Development Company Limited (OGDCL). - Reforms package for the purpose of transforming Kashmir Council into an advisory body, as decided by the National Security Committee, was also presented before the Cabinet. - The Cabinet accorded approval for tabling of the reforms before the AJ&K Legislative Assembly. Reduction in regulatory duty on export of copper scrap from 25 % to 15 % was also approved by the Cabinet. - The Cabinet decided to re-impose regulatory duty on import of cotton with effect from 15thJuly 2018. The Cabinet also approved the recommendations of a Committee constituted by it earlier regarding LNG Terminals at Port Qasim and referred the matter to the Board of Directors of Port Qasim Authority for further consideration and implementation.