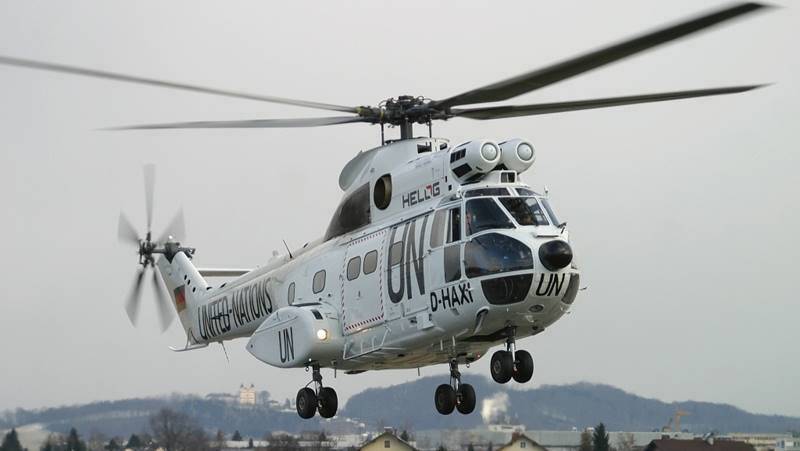 UN link investigators said Wednesday they had not ruled out any avenue in a probe link into a helicopter crash link in eastern DR Congo link that killed eight UN link, although one lead was a "shining object" that may have caused the incident.

Six Pakistanis, a Russian and a Serb were killed when a Puma helicopter with the UN link mission MONUSCO crashed while on reconnaissance over the troubled region on Tuesday.

Military authorities in North Kivu province have accused the M23 rebel group of downing the chopper, though the faction denies the charge and instead blames the Congolese army.

"The initial preliminary observations of our force headquarters describe a crash link that may have been caused by a shining object link," Khassim Diagne, the deputy special representative for protection and security at MONUSCO, told the French radio station RFI.

"The wreckage of the helicopter has been located, an inquiry is underway and should be able to ascertain more about the nature of this object," she said.

The crash link seems to have an "external" cause, she said, but stressed it was "premature" to rule out an accident.

Diagne, in his remarks to RFI, said that investigators were not ruling out any scenario, including "an attack".

The bodies of the eight peacekeepers have been taken to Goma, North Kivu's capital, MONUSCO said on Wednesday.

The helicopter came down in the Tchanzu area of Rutshuru Territory, where the army and the M23 rebels had been fighting the day before.

The M23 -- its name derives from "March 23 Movement" -- emerged years ago from an ethnic Tutsi Congolese rebellion in North Kivu that was once supported by Rwanda and Uganda.

The group was defeated by the army in 2013 but has resurfaced since November, accused of staging several raids on military positions around Rutshuru.

UN link spokesman Stephane Dujarric Wednesday did not blame the M23 group for the crash link.

But he said UN link Secretary-General Antonio Guterres was "deeply concerned by the resurgence of M23 activities in the border area between the DRC close to Rwanda and Uganda."

The movement claims the authorities in the capital Kinshasa have failed to respect commitments undertaken to ease the demobilisation and integration of its combatants.

The crash link came after the Congolese army accused Rwanda of backing the M23, charges Kigali denied on Tuesday.

After months of suspicion and decades of mistrust between DR Congo link and its neighbour Rwanda, the Congolese army claimed they had captured two Rwandan soldiers link on Monday in the area of the fighting.

Kigali strongly refuted any involvement, saying the men were captured more than a month ago and were not part of its army.

The M23 still occupied the positions taken overnight Sunday to Monday, including Tchanzu and Runyoni, but withdrew from positions on the road between Goma and the town of Bunagana near the Ugandan border.

Several residents who had fled their homes during the fighting had returned to their villages on Wednesday.

"We came back to protect our belongings because thieves have been pillaging our homes," said Jean-Paul Mazirane, from the village of Tchengerero.

"The M23 is nearby on a small hill. We're still scared," he added. "But some people have opened their shops so that people can buy salt, soap" and other essentials.

Jackson Gachuki, a community leader in the village of Jomba, said on Wednesday evening: "The M23 rebels plundered everything before withdrawing."

The Congolese and Ugandan armies are working together to fight the M23 in the region, he said, as they have been further north against the Allied Democratic Forces rebel group.