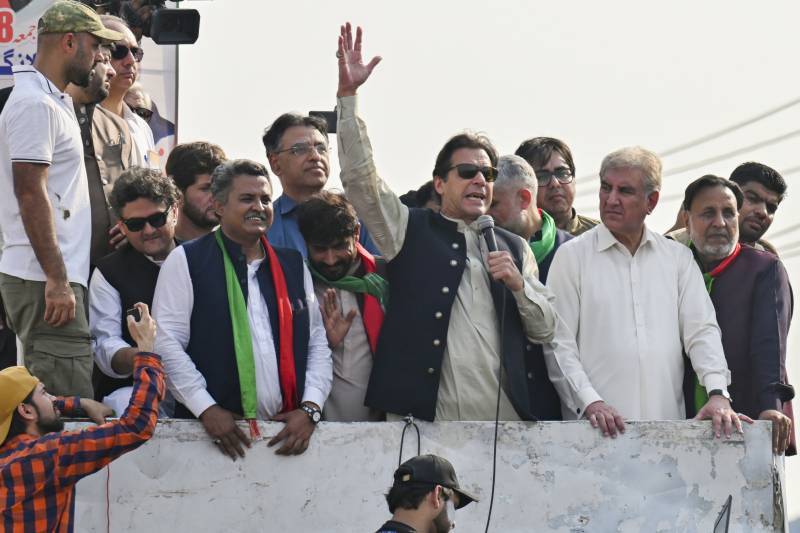 Addressing the participants of PTI’s long march in Muridke on Sunday, Imran Khan asked why he would speak to boot-polishers?

The PTI chief also questioned why he would send a message to the premier. He also said that he was not raised in a “military dictator’s nursery”. “I do not call Ayub Khan daddy like Zulfikar Ali Bhutto. I am not like Nawaz Sharif who build General Jilani’s home and massaged General Ziaul Haq’s knees to become a minister,” Imran Khan taunted.

Imran Khan, while talking about Indian media’s coverage of his criticism of the army leadership, said “I am telling the Indian media that his party is standing with the Pakistani Army. I came into government with people’s vote, not with the establishment’s support.”

Leading a big rally at the GT Road, Imran Khan reached Sadhoki from Muridke on Sunday afternoon and addressed the long march participants.

Imran Khan said to the workers in Sadhoki that if Senator Azam Swati criticized the Army Chief, what kind of apocalypse had come?

The PTI chairman expressed his anger over the ill-treatment of Senator Azam Swati in police custody and said he was tortured like a terrorist.

Meanwhile, the Pakistan Tehreek-i-Insaf long march which is heading towards Islamabad again faces delay as it resumes its third leg on Sunday from Muridke.

PTI Chairman Imran Khan would lead the march which was supposed to set off at 11am today. But Imran still could not reach Muridke from Lahore till 12:15pm. It seems that people are not interested in the long march which is scheduled to reach the federal capital next Friday

According to the schedule, Imran will also address the participants of the march later today.