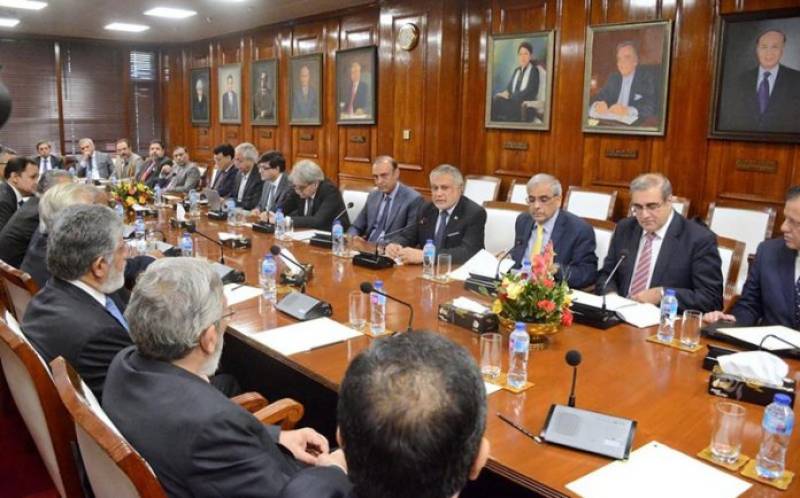 Federal Minister for Finance and Revenue Ishaq Dar has reiterated that the actual value of the Pakistani rupee is less than 200 against the greenback and it will be brought down soon.

He said this while chairing a meeting with the heads of Forex Exchange Companies at State Bank of Pakistan Karachi on Saturday.

The meeting was attended by Governor State Bank Jameel Ahmed and other officers.

Giving the details of the meeting, Forex Exchange Companies Zafar Pracha said that the meeting has issued a warning to US Dollar holders that the dollar will soon become cheaper. “Action should be taken soon against those who smuggle dollars again,” he added.

The finance minister said that soon the dollar will be seen weakening and the rupee will be strengthened.

Zafar Pracha said that it was decided in the meeting that strict action would also be taken against those who make unauthorized purchases of dollars.

The finance minister clearly said that any bank involved in the purchase of dollars would not be spared under any circumstances, Zafar said.

Finance Minister said that the true value of the dollar was below Rs 200, Pasha said. He said that Dar told the meeting there were positive indicators regarding the national economy.

During the meeting, Forex Exchange Companies also made some important suggestions to the Finance Minister. It is suggested that import should be linked with export. If there are exports of 100,000 dollars, imports of 200,000 dollars should be cleared instead, he said.

No permission should be given to commercial importers. Import of commodities and industrial needs should be allowed, Zafar Pracha added.

It is also suggested that exchange companies should be given the status of the export industry. Steps should be taken to increase remittances and the trade policy between Iran and Afghanistan should be re-examined.

Ishaq Dar said that the first focus is to improve the economic situation.

After the economic situation improves, other issues will be the focus, Zafar Pracha concluded.