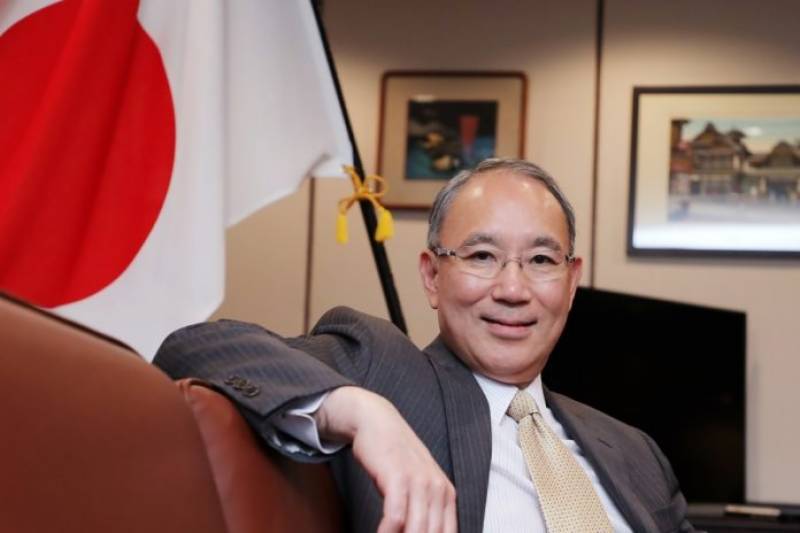 ISLAMABAD - Japanese Ambassador to Pakistan, Kuninori Matsuda Wednesday said Pakistan is one of the top ten countries from where Japan is in process to hire skilled workers as it is facing serious labor shortage.

Speaking here at the conferral ceremony, he said Japan government has decided to accept foreign human resources, with specific expertise and skills.

The Japanese embassy will soon sign a memorandum of understanding with the government of Pakistan in this connection, the ambassador said and added this will play a vital role in contributing to the human resources and economic development of Pakistan as well as in promoting bilateral cooperation.

Ambassador Matsuda extended his deepest congratulations to MAAP president and other members upon receiving this prestigious award from the Minister for Foreign Affairs of Japan.

Paying rich tributes to MAAP members, he said MAAP members have worked with full dedication to promote Japan-Pakistan educational linkages and the government of Japan greatly values these services in this regard.

The association has played an essential role and it has acted as a bridge of friendship and goodwill between the two countries.

The ambassador stressed that people-to-people exchange is one of the most important pillars which are sustaining the friendly relationship between Japan and Pakistan.

He also said 2022 will be celebrated as the year of 70th anniversary of the establishment of diplomatic relations between Japan and Pakistan and hoped for the active participation of The MEXT Alumni Association of Pakistan (MAAP) in arranging numerous educational as well as cultural activities in the country.

The ambassador hoped that the MAAP members can play a vital role in extending their cooperation in this regard by advising those Pakistanis who wish to work in Japan as skilled workers on the language, lifestyle and culture of Japan.

MAAP is an organization of the scholars, scientists, doctors, engineers etcetera who were awarded scholarships by the Ministry of Education, Science and Culture, Japan (MEXT) for higher studies in Japan. It was founded in 1996 in Islamabad.

The objectives of this organization were to develop contacts with the MEXT scholars not only in Pakistan, but also in other countries, with the view of exchanging information of mutual benefit.

This organization actively contributes in promoting and strengthening friendly relationship between Pakistan and Japan.

Ambassador Kuninori Matsuda, on behalf of the Minister for Foreign Affairs of Japan, presented the commendations to MAAP President Dr Nasir M Khan at a reception hosted by him at his residence here.

The government of Japan has conferred Japanese Foreign Minister’s Commendations 2019 upon MAAP, an association of Pakistani alumni’s of Japanese universities, in recognition of its significant contributions towards the promotion of educational relations between Japan and Pakistan.

Every year, the Foreign Minister’s Commendations are awarded to individuals and groups with outstanding achievements in international fields, to acknowledge their contributions to the promotion of friendship between Japan and other countries and areas.

Every year, the Foreign Minister’s Commendations are awarded to individuals and groups with outstanding achievements in international fields, to acknowledge their contributions to the promotion of friendship between Japan and other countries and areas.