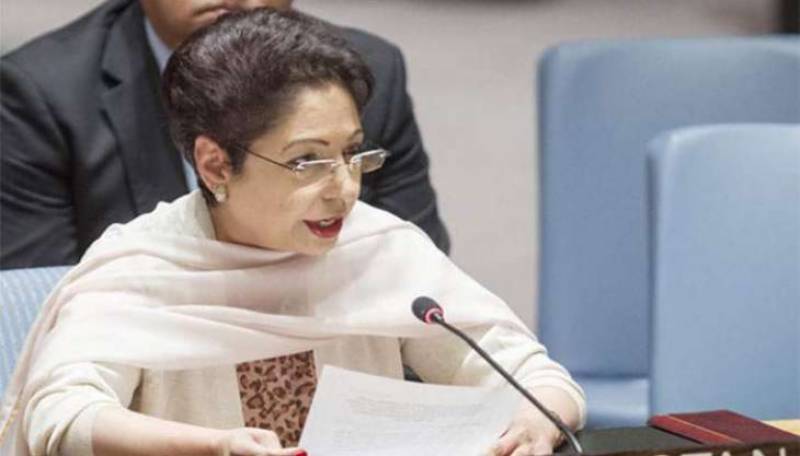 UNITED NATIONS: Pakistan Monday highlighted at the United Nations India's persistent human rights violations in occupied Kashmir, saying New Delhi's denial of the UN-pledged right to self-determination to the Kashmiri people was a "telling example" of its impunity.

"When they demand this right, the people of Jammu and Kashmir are met with repression and ruthless human rights abuses at the hands of Indian occupying forces," Ambassador Maleeha Lodhi told the General Assembly's Third Committee, which deals with social, humanitarian and cultural questions.

In this regard, the Pakistani envoy said the detailed June 14 report of the UN High Commissioner for Human Rights had "lifted the veil from decades of obfuscation of massive violations" of human rights in Indian occupied Kashmir.

"The situation remains a blot on the conscience of humanity, and one that demands immediate corrective action," she said a debate on the Promotion and Protection of Human Rights.

Ambassador Lodhi said the Universal Declaration of Human Rights has served as a catalyst for progress, and yet, egregious and systematic rights violations take place every day, with plausible deniability becoming the new norm.

Underlining that economic and social rights facilitate the realization of civil and political rights, she expressed support for the mandates of the UN Special Rapporteurs, who must discharge their responsibilities with full independence, within their mandates, with impartiality, transparency, non-selectivity and without any politicization.

Stressing the values of empathy, compassion and understanding, the Pakistani envoy said, "We should not allow diversity of backgrounds, beliefs and perspectives to be endangered by the demons of hatred and extremism.

"We need to create and strengthen the necessary safeguards against new and contemporary manifestations of discrimination, xenophobia and Islamophobia," she added. "Promotion of a culture of peace, as well as dialogue and cooperation between religions and civilizations would help us achieve this objective."

In this context, she said that Philippines, Pakistan co-sponsors a resolution to promote interfaith and inter-cultural dialogue. The resolution is expected to come up for vote next month.

Reaffirming Pakistan's commitment to protecting human rights, Ambassador Lodhi said the new government of Prime Minister Imran Khan was committed to the consolidation of democratic institutions, the rule of law and improving good governance, as well as to a new framework for social change, which focuses on education, health, women, youth, and minorities.

Pakistan, he said, will continue to support an equitable, just and fair order, both globally and at home. "We will continue our efforts to choose dialogue over division, harmony over intolerance and Right over Might."

Speaking last week before the Committee for the first time as High Commissioner for Human Rights, Michelle Bachelet said the world body is facing a test. Multilateralism is eroding, and with it the values and norms that underpin a global commitment to human equality and dignity. Yet, peace, security and development can only be achieved through greater justice and equity.

She urged Member States to safeguard a human rights-based multilateralism, lest all the United Nations pillars be undermined.