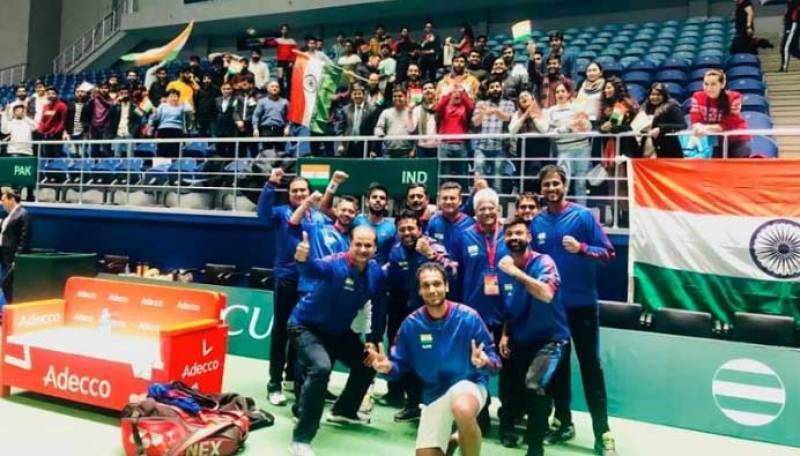 ISLAMABAD - Veteran Leander Paes improved his Davis Cup record to 44 doubles wins Saturday as India thrashed Pakistan 4-0 in the Asia/Oceania tie played at a neutral venue due to political tensions between the arch-rivals.

The 46-year-old Paes combined with Jeevan Nedunchezhiyan to serve out Pakistan´s teenage pair of Muhammad Shoaib and Huzaifa Abdul Rehman 6-1, 6-3 in the Kazakhstan capital of Nur-Sultan.

Paes, who overtook Italy´s Nicola Pietrangeli as Davis Cup´s most successful doubles player with his 43rd win last year, won the doubles match to seal India´s berth in the qualifiers.

Sumit Nagal then turned out for the reverse single to outplay Yousaf Khalil 6-1, 6-0 in 32 minutes and the fifth match was not played.

India will now travel to Croatia -- two-time Davis Cup champions -- next year for the world group qualifiers to be played on March 6-7.

The 12 winners of the qualifiers will join the six teams -- Spain, Canada, Great Britain, Russia, France and Serbia -- that have already booked their place in the Davis Cup finals.

The International Tennis Federation moved the Asia/Oceania Group 1 tie away from Islamabad because of India´s security fears even though Pakistan opposed the decision.

Pakistan´s top players Aisam-ul-Haq Qureshi and Aqeel Khan pulled out of the tie in protest.

The match was also pushed back from September because of security fears, as the two countries were wrangling over the disputed territory of Kashmir.

The nuclear-armed neighbours split angrily in 1947 after independence from Britain and have fought three wars since. Sport has also suffered badly.

India cut bilateral cricket ties with Pakistan after attacks in Mumbai in 2008 that authorities blamed on Pakistani militants.